It was clear to the Allies from the early years of World War II that German tanks were a big problem. From the early Panzer models to the medium Panthers and finally to the famed Tiger I and Königstiger, German armor combined with German tactics were major threats to Allies forces throughout the war.

To help counter the German armor threat on the battlefield, the Allies quickly evolved their anti-tank weaponry. Building on earlier. lighter guns, the British introduced the “6 pounder” early in the war. Even before entering the war, the United States began production of its version with the M1 57mm anti-tank gun which it exported for use by UK and Soviet forces. Despite the gun’s mixed effectiveness against the strongest German tanks and only occasional use against infantry, the M1 57mm became the standard Allied anti-tank gun of the war with some 15,000 produced.

I’ve previously modeled the British 6 pounder version of these guns for Flames of War, but I wanted to add some of the American M1 57mm models to my miniatures arsenal ahead of the Sint-Oedenrode scenario I’ll be running at the upcoming Fall In! convention in November. As luck would have it, a member of Metropolitan Wargamers in Brooklyn, NY was getting rid of some extra packs of the models and I picked them up on the cheap.

Getting these assembled, painted and ready for the table was a quick process. After gluing everything up and covering the bases in a layer of filler putty, they got hit with a basic olive drab spray base undercoat. Flesh and equipment details got picked out, and skin was topped off in a flesh wash. The guns themselves received a brown wash and a lightened green highlighted brush coat. The bases were flocked, I added little bits of shrubby and then everything got a matte spray finish.

The resulting four guns and two command stands gives me a lot of flexibility to add these to a lot of forces throughout the late war period I generally play. As a ubiquitous gun on the battlefields of World War II, these M1 57mm artillery pieces are certain to be making a lot of appearances in my games to come. 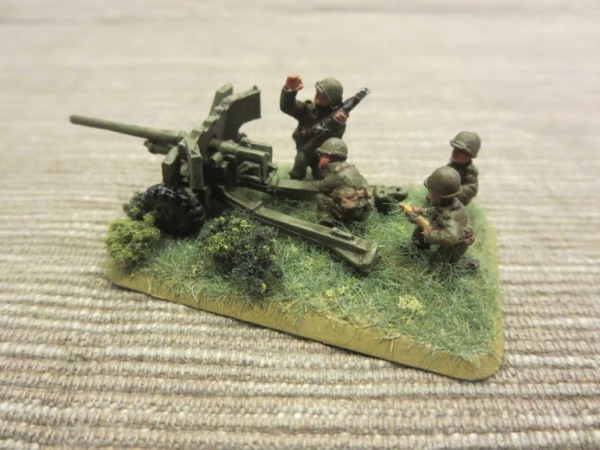