The French and Indian War (1754-1763) called for new tactics for old, professional armies steeped in traditional European warfare. With hostilities among French, French-allied Indians and Canadians, British and colonists of all stripes erupting over territorial disputes on the frontier of North America, locally-mustered soldiers were of paramount importance to all sides.

Robert Rogers, born in Massachusetts of Irish immigrants in 1731, was key in raising forces in New Hampshire for the British in the mid 1750s on the eve of the conflict. With animosity toward Indians in the region, his recruits formed what came to be known as Rogers’ Rangers. Operating out of Northeastern and Central New York, the company of some 600 men who formed Rogers’ Rangers participated in some of the key actions of the war including the Battles on Snowshoes and the Battle of Carillon, both in 1758.

Aside from his leadership during the FIW, he also contributed significantly with his “Rules of Ranging.” Written in 1757, the 28 rules provide an outline for the discipline and tactics which defined Rogers’ own brand of guerilla-style wilderness war. So visionary in their combination of Native American style warfare with some European principles for the rules of war, some version of these have been used by US Army Rangers to this day.

Following the end of the FIW, Rogers continued to work with the British military during Pontiac’s Rebellion that swept through the Great Lakes in 1763-1766 and finally during the American War of Independence in the 1770s and 1780s. Despite having devoted his entire adult life to warring on behalf of the British in North America, Rogers died in 1795 poor and in obscurity in England at the age of 63.

Robert Rogers has managed to hold considerable space in pop culture for generations. Even though his alliances were with British rule during his decades-long career, his legend rests squarely within a particular type of colorful American frontier character who succeeds by breaking the rules and forging his own path. The persistence of his legacy has been helped by comics, books, movies and TV shows that continue to today.

Northwest Passage, the 1937 bestseller by Kenneth Roberts, probably did the most keep the legacy of Rogers alive in pop culture. The book’s popularity led to a 1940 MGM epic starring Spencer Tracy. Nearly two decades later, Rogers came to life anew in a 1958-1959 NBC half-hour show of the same name. This time Buddy Ebsen portrayed the famed ranger during the post-World War II boom in western and frontier pop culture.

The modern iteration of Robert Rogers appears in the AMC series TURN: Washington’s Spies, now into a fourth season. While the story focuses on the spy network surrounding New York City in the early days of the American Revolution, considerable space is given to Rogers and his complicated relationship with the British a decade after the FIW.

For my Rogers’ Rangers, I’ve turned again to Galloping Major Wargames. GM figures, like those I modeled as my FIW Virginia Provincials, have a chunkier heroic 28mm scale I love for their detail and personality. The ranger miniatures offer some variety of irregular outfits and weapons including muskets and hatchets. Headgear include the signature bonnets as well as tricorn and rounded jockey hats with fronts cut and cocked back to the crown and detailed with white edging.

The famed short forest green jackets are detailed with lighter green lapels and cuffs finished with silver buttons over earthy red vests. For leggings, I mixed the figures up with colors ranging from a light brown buckskin to a more colorful blue.

Together, I feel my painted Rogers’ Rangers typify how they would have looked as they fought in the fields and forests of 18th-century North America. 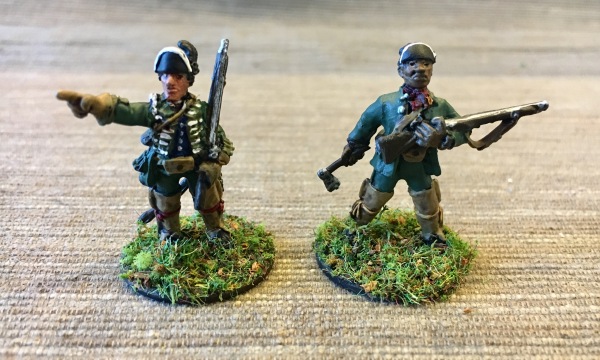 Major Robert Rogers and “Duke” Jacob, a freed former slave who is said to have been a member of Rogers’ Rangers 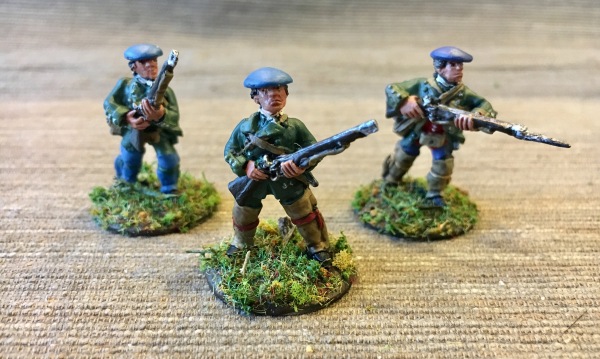