The city of Caen presented a big target during the Allied invasion of Normandy in June 1944. One of the larger cities in the region of the invasion, it also occupied an important series of crossroads straddling the Orne River. Less than ten miles from the British Commonwealth forces landing zone of Sword Beach, Caen was a target for British and Canadians wading ashore on June 6th. Despite a relatively easy landing at the beach, Allies with their eye on Caen were met with a hastily-organized armored counterattack from the German 21st Panzer Division. By the end of the day, the British sat just halfway to their objective and Caen remained in Axis control.

Over the next two months, the area around Caen became a bogged-down front as Anglo-Canadian forces positioned themselves around the city. The eventual capture of the city on August 6th was costly for all involved. The ancient city was nearly leveled with Allied bombing campaigns and much of the French civilian population fled. The British forces suffered around 50,000 casualties, a devastating loss of men and equipment for British commander Bernard Montgomery. With the costly British victory, it had achieved not only the occupation of Caen but had also provided an enormous distraction for German forces which suffered even greater losses than the Allies.

This past weekend at Metropolitan Wargamers in Brooklyn, NY, a couple of us ran through a non-historical scenario typical of the British-Germany engagements just north of Caen in early July 1944. The “North of Caen” scenario is provided in the basic rule book for I Ain’t Been Shot Mum, the fantastic company-level World War II game that has fast become a favorite for some of us at the club.

British infantry advance through an orchard under blinds north of Caen

The small infantry engagement is set in the fictional hamlet of Le Moulin on a table of flat, open terrain with fields, orchards, low hedge rows and five stone buildings set at a crossroads. The game begins with three British infantry platoons entering from the north under blinds after an initial off-board artillery bombardment of the Germans dug under in around the farm and crossroads. The objective of the game is for the Germans to eliminate the British advance while the British are tasked with seizing four of the five buildings or otherwise eliminating the German troops. 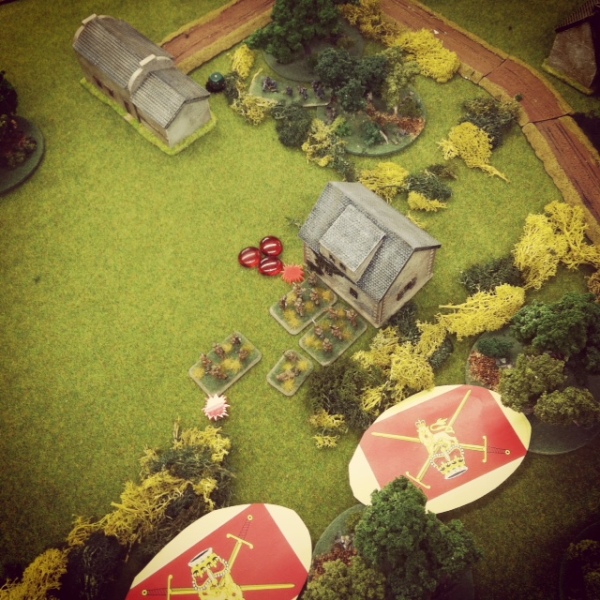 Following my initial bombardment, my British advanced under blinds for a few turns through the orchard northeast of the crossroads. The German blinds positioned themselves in a wood at the crossroads and in a small orchard southwest of the hamlet. Three of my blinds moved toward cover to my left behind a barn while my third false blind moved toward the road. My first blind was spotted behind the barn by a German platoon armed with three rifle sections and a deadly MG42. With the Germans deploying in a nearby barn and within the orchard, they opened up on the British rifles. With not enough cover behind the small barn, one British rifle section was all but eliminated in the first round of fire. 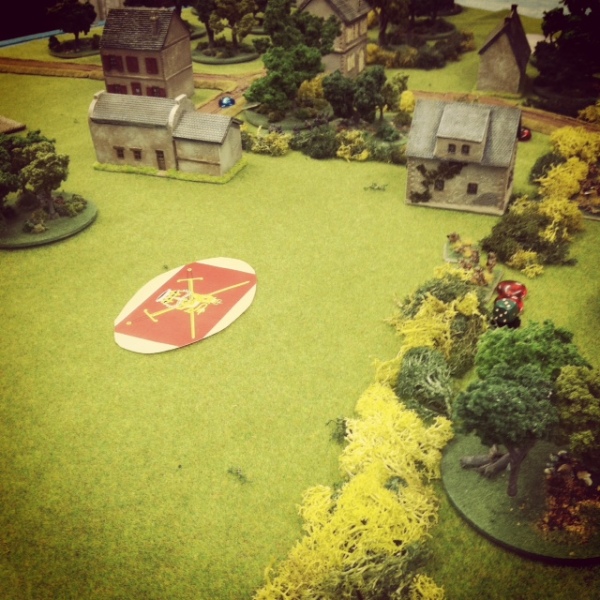 The British survivors behind the barn returned fire, firing their rifles and 2″ mortar into the Germans in the orchards and nearby barn. In the meantime, my false blind was revealed as a second British platoon slipped to the hedge to the other side of the barn. Firing at the Germans from each side of the barn, the MG42 was forced to retreat back south of the crossroads. But the damage had been done to my first platoon at the barn, and two fire teams fell back to the orchard leaving one safely inside the barn. Sensing a brief opening, my final blind sprinted across the wide open field between the barn.

The British blind is exposed, take fire and break for hedge in the distance

Midway through the field, the German rifles in the second barn spotted and revealed my blind, slowing their run and forcing them to deploy in the open. The final German blind revealed itself among the buildings west of the crossroads. My fresh British platoon hopped the hedges and likewise crossed to the west of the road, opening fire at the Germans in the building just the other side of a small orchard. Subsequent turns of fire were exchanged and my British losses started to pile up on my right.

Back at the field on the British left, combined rifle and mortar fire poured into the Germans in the barn. Despite shock stocking up on the Germans, their position in the barn allowed great enough cover allowing them to slowly begin wearing down the exposed British platoon which became pinned from movement. With British taking losses to the right and less against well-protected Germans in the heavy stone buildings, it was not working out as a good day for the British who ceded the tiny hamlet to the Germans. More costly days were to come after this day just north of Caen, but a month off there would be victory for the British.

One thought on “I Ain’t Been Shot Mum: North of Caen 1944 Scenario”