On December 16, 1944 what became known as the Battle of the Bulge began. The German surprise winter campaign offensive – Unternehmen Wacht am Rhen (“Operation Watch On The Rhine”) – would run until the end of the following month. In the cold, snowy forests of the Ardennes region of France, Luxembourg and Belgium, the series of ferocious engagements would see the highest casualties for the US during WWII severely set back the German war machine’s fighting ability for the remainder of the conflict.

Map of the southern flank of the Battle of the Bulge, featuring Buchholz Station

Early in the morning of the 16th, a US company at Buchholz Station was taking a quick break from the morning’s action. Lining up for a hot breakfast, the weary American riflemen spotted distant shadowy shapes  moving through the fog along the nearby railway tracks. Initially figuring these troops to be fellow Americans, machine gun fire quickly erupted as the realization that these were in fact Germans moving to take the nearby train station. The Americans rushed to meet the Germans, eventually filling the area with exchanged mortar and gun fire. Late-arriving US anti-tank guns and some gutsy attacks eventually repelled the small German force.

Table set up for Buchholz Station at Metropolitan Wargamers

Recently on The Miniatures Page message boards I stumbled on a Buchholz Station scenario for Flames of War. A fellow blogger had sunk a fair amount of research into the scenario and presented a great overview on his blog known simply as Kevin’s Blog. Having never done a Battle of the Bulge scenario before, I was anxious to give Kevin’s game a try.

This past weekend I finally got around to running the scenario at Metropolitan Wargamers. Using the online scenario as a jumping off point, I modified it down to a 4′ x 4′ table decked out in snowy terrain (using regular baking flour). I also tweaked the US and German forces since my own collection didn’t have exactly what Kevin’s scenario called for as written. 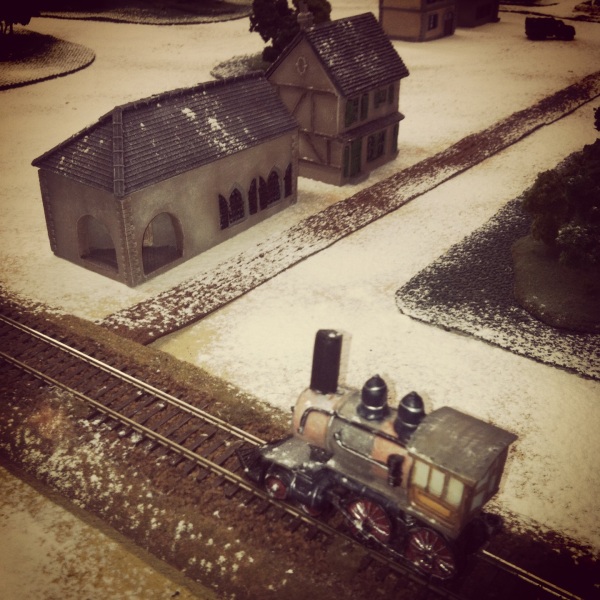 The Confident-Veteran Germans consisted of three rifle-machine gun Grenadier platoons, plus a heavy machine gun platoon. The Confident-Trained US company featured three rifle platoons, a light machine gun and mortar weapons platoon and a small anti-tank gun platoon towed by Jeeps. Both the US and Germans had large off-table mortars with German spotters deployed in the game and all US command spotting for their own mortar crews. Each company featured just under 750 points per side.

US deployment at the beginning of the game

As in the scenario outline, the Americans began with two rifle companies on the board. One was deployed within 4″ of the chow truck, and the second within 4″ of the small group of buildings at the table corner. All other US platoons were held in delayed reserve, meaning they would not come on until at least turn three. The towed anti-tank gun platoon would be the last reserves for the Americans.

German deployment after their first turn

The German platoons deployed all at once with their first turn, entering the table within 6″ of either side of the railroad tracks. They chose to move at the double and divided their force, heading toward the woods to hold off an American advance and straight toward their objective of the train station.

Turn one ends with a race to the train station

The Americans finished the first turn with their own movement at the double. The platoon at the chow truck headed for a small clump of trees, hoping the forest would provide just enough cover from the coming German fire. The second platoon stayed to one side of the road, out of range of German bullets and racing to the train station. 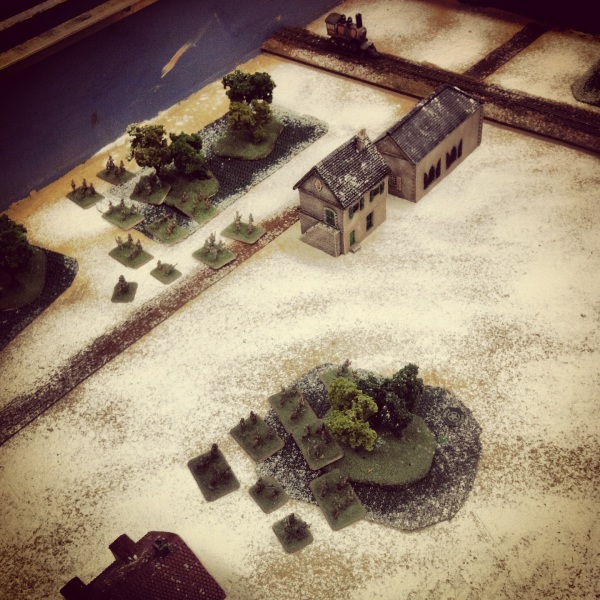 In turn two, the Germans and US platoons each exchanged fire from their occupied woods. The US took their first casualties and were pinned from the withering German heavy machine gun fire. With most of the fire concentrated on the one US platoon in range, the second American platoon was able to slide toward the train station to control the objective ahead of the Germans. 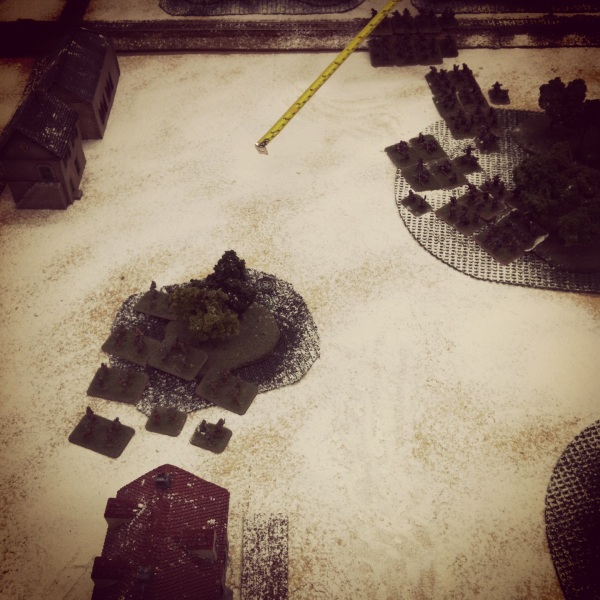 US and German platoons fire between the woods

Turn three was somewhat of a repeat of turn two as the one US platoon swallowed a ton of German gunfire and remained pinned down in the woods. The US failed to roll any reserves on the table in their first attempt, but the platoon at the train station began occupying the buildings to hold off the coming German onslaught. 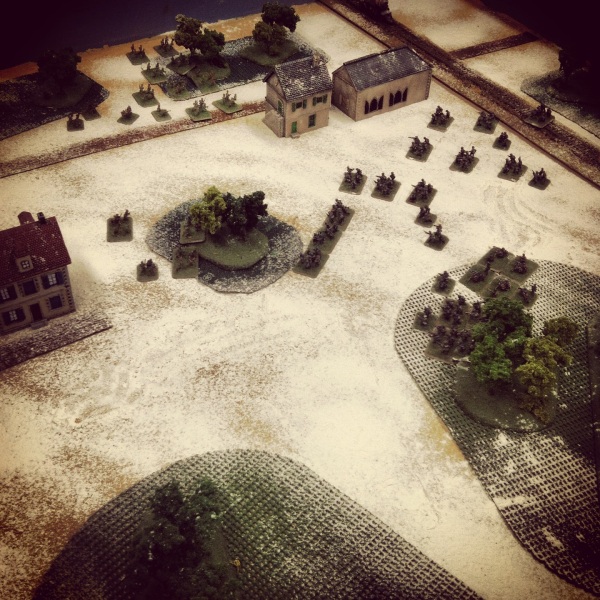 The Germans sprint in the open 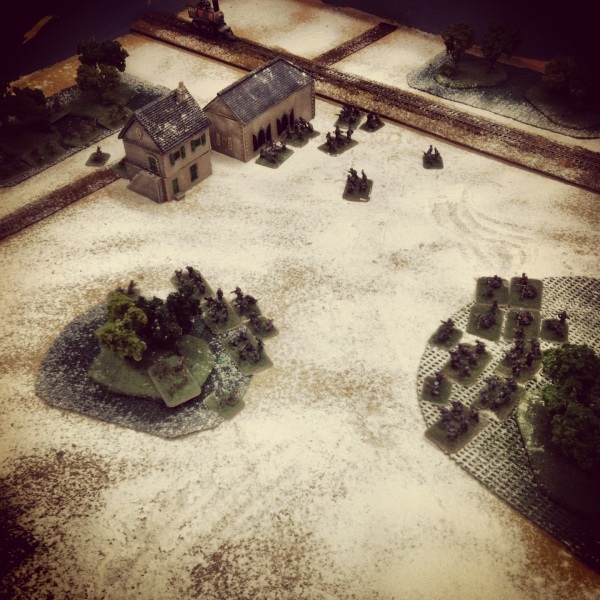 The last of the remaining Americans in the woods at the center of the table fled in turn five, just as the Germans prepared to assault them. Another German platoon reached the doors and windows of the train station but had their assault repulsed. At long last, the first American reserves arrived, and a light machine gun and mortar platoon platoon hit the ground running at the double. Additional US off-table mortar fire rained onto the assaulting Germans in the snowy open field.

The Germans still in the woods broke from the trees iat the top of  turn six and made way toward the train station. Germans already at the station destroyed the remaining Americans there, effectively taking the objective. A few Americans ran at the double to contest the objective. The US responded with fire from the newly-arrived light machine guns and more from the mortars.

The final US reserves arrive…but too late

Things ended on turn seven with the last of the American reserves arriving too late and too far out of range movement and fire to contest the train station objective now in control by the Germans. Timing on the battlefield is everything, and the lack of US reserves arriving earlier in the game made it a tough slog for the Americans. The scenario is pretty fairly matched, and playing a FOW game without the usual mass of tanks was a refreshing break.

The Battle of the Bulge also seemed fitting, given the snowy winter we’ve had here in Brooklyn this past month. With the 70th anniversary of the Battle of the Bulge coming up at the end of the year, playing this first scenario already has me thinking of more wintery tabletop warfare about 11 months from now.