I just finished reading Jon Peterson’s epic history of wargaming, “Playing At The World,” this past week. Reading through several hundred pages of gaming lore centered around the development of Dungeons & Dragons by TSR, I’ve had a yen to track down some of my old D&D rule books from those glory days of my early adolescent years in the late 1970s and early 80s. Well, as if the gaming gods themselves were reading my thoughts, the now-owners of the D&D franchise, Wizards of the Coast, launched a partnership just this week with DriveThruRPG to begin offering every piece of classic D&D as digital downloads.

The new web store, www.danddclassics.com, launched with more than 80 classic bits of D&D, from whole rule sets to module campaign adventures to detailed expansions. With a few downloads initially available for free and dozens more in the $5 to just under $20 range, the site promises to eventually release more material long-since out our print from the 1970s-90s. The site struggled under the massive weight of countless rabid fans and crashed over and over again on its first day, clearly demonstrating the pent-up demand for long-lost D&D material only to be found at the bottom of abandoned teenage closets and on eBay at inflated prices. 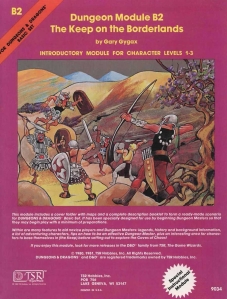 After multiple site time-outs and crashes, I managed to download a free file today: 1979’s B1 module “In Search of the Unknown.” For new players like me just getting into D&D as 1980 and my teen years neared, “In Search of the Unknown” and B2 “The Keep on the Borderlands” (available online now for $5) were our first forays into the professionally-developed D&D modules that showed us the way toward creating our own adventures. These self-contained adventures allowed players like my friends and me to jump right into a few hours of gaming with story background, maps, treasure and monsters neatly set forward in about 20 pages. These books also served as teaching tools as we learned to craft our own elaborate adventures in our childhood bedrooms, basements and classrooms after school.

With the release of 1979’s “blue book” Basic Rules (shown at right), TSR presented a serious clean-up and consolidation of the D&D rules which had been slowly released in multiple pamphlets throughout the early to mid 1970s. Though D&D had already established itself as the king of the role-playing game world, it was the release of the Basic Rules that roped-in hundreds of thousands of new players like myself. From these rules onward, a constant flow of modules, new iterations of the rules and expansion books became one of the most exciting aspects to me about D&D while also being much criticized by many for TSR’s strategy of extracting every last dime out of its faithful fans.

And so, here we are again some 30+ years later with D&D waging melee combat on our wallets with the spectre of a full-compliment of its back catalog coming soon. Already I see many module favorites of mine available like G1-3 “Against the Giants” and Q1 “Queen of the Demonweb Pits.” Hardcover classics such as the ancient religions and mythologies compilation of  “Deities and Demigods” and the odder European-themed monster compilation “Fiend Folio” are also currently available. I credit “Deities and Demigods” in particular for providing me a sort of independent study comparative religions primer at the age of 13. A few years later, this interest would lead me to Joseph Campbell’s “The Power of Myth” as well as his earlier writings. Three decades on, my life-long interest in the intersection of the stories of faith in the world’s societies — what I commonly refer to as the “holy mish-mash” — continues to shape my outlook on life. D&D is just chocked full of these kind of rippling memories for me.

The re-release of this material seems obvious for a whole host of reasons as I and my fellow first-generation D&D players are entering mid-life with our own children and a load of nostalgia for a pre-video game world in tow. Then again, as I scrolled through all the D&D titles again this week, I was reminded of the precedent D&D set in so many ways for today’s electronic gamers. Of course the basics of hit points, armor class, found items, completed missions and skill advancement laid out in D&D provided the foundation for today’s popular video gaming universe. But with each of these additional D&D modules and rules expansions, TSR also provided an early blueprint for the constant version updates and downloadable content of maps, missions, skins and characters that any inhabitant of the world of the Xbox and Playstation finds every day.

As always, what is old is new again, and I’m slowly getting to a place where I want to unplug my kids for a few hours some afternoon, help them roll-up a couple characters and blow the digital dust off these D&D treasures now just a click away.