World War I has quickly moved from news to memory to history in the past 100 years, especially in the United States. While there are certainly plenty of grand remembrances being made of the lingering historical and political ripples of the Great War, the best parts of historical memory often continue to ring truest to us through personal stories. This is the reason why a classic book like All Quiet On The Western Front or the more recent graphic novel The Harlem Hellfighters resonate still in telling the story of WWI.

So, in this centenary year it’s a pleasure to have the distant memory of WWI retold in a vivid modern way with Valiant Hearts: The Great War from Ubisoft. Like any good war story, Valiant Hearts isn’t really about guns and glory, but more about love, friendship, connection and dedication humans strive to maintain when faced with the most hugely catastrophic events.

The cast of characters presented in Valiant Hearts represents a cross-section of nationalities swept up in the European conflict. The main character is Emile, a French farmer who is pressed into service at the outbreak of the war. His daughter is in a relationship with Karl, a German who is exiled from France at the beginning of the war and subsequently compelled into service with the German army. Just after completing basic training, Emile meets Freddie, an American ex-patriot living in Paris and volunteer in the fight against Germany. Once in the trenches, Emile befriends a military service dog named Walt. A fast-driving Belgian nurse named Ana completes the main cast of characters, although a British pilot named George does make a cameo later on in the game. 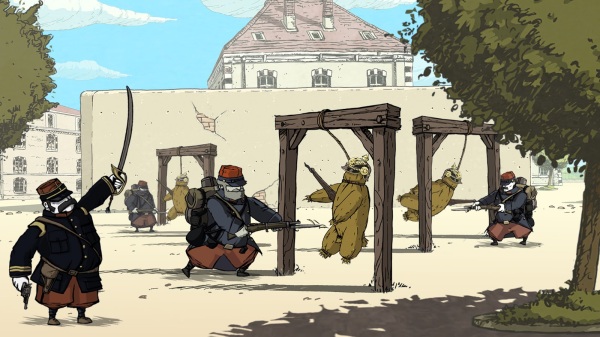 With a minimal amount of introductory back story of the outbreak of WWI, the game begins with Emile marching off to some quick basic training which introduces a player to the basic climbing, attacking, picking-up and throwing actions. Once at the front, the game quickly moves into the more familiar trench warfare settings which were the hallmark of the war.

For gamers looking for WWI first-person combat wielding a bayonetted rifle or driving a clattering tank through No Man’s Land, there will be disappointment. Although death and destruction surrounds the game, there is surprisingly little direct combat experienced by the player. The entire WWI setting and all its trappings of planes, tanks, artillery and machine guns become tools to propel the characters to action, more like a violent ghostly hand lurking in the background than the main focus of the action.

As a game, the main focus of Valiant Hearts is at its core a platform, puzzle and adventure game. It is a game set within the war, but the playable characters are not working on racking-up body counts. More typically, a character will work their way through completing a series of tasks to progress to the next level– break down a wall, crouch in a trench, dig a tunnel, climb a ladder, crank a wheel, set a charge and blow up a bridge.

Different characters in the game also work in combination to get puzzles solved and sometimes work with non-player characters. For instance, the burly Freddie is good at smashing down walls, doors and barriers with his bare fists while Emile is handy at digging and Ana provides care to wounded soldiers on and off the field. Characters can also order commands to Walt to move and fetch objects from areas unreachable by the other human characters, such as crawling under clouds of poisonous gas. 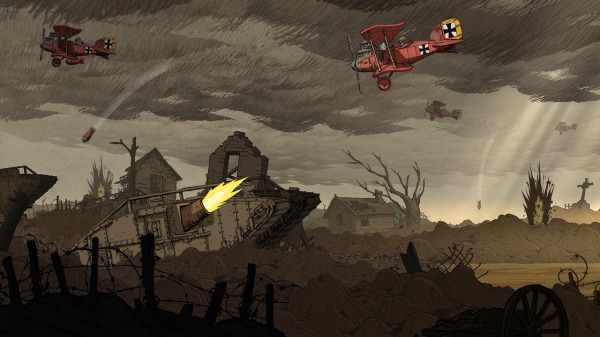 Beyond the entertainment of the puzzle adventure gameplay, Valiant Hearts is rich in historic detail. A number of short behind-the-scenes developer videos on the game’s website show the depths to which the team at Ubisoft went to paint a vivid picture of WWI using primary documents. Even within the cartoonish game animation, there’s a ton of detail in the flags, uniforms, weapons, vehicles and settings throughout the game. The diversity of nations participating in the war is well-represented, so we not only see the typical British, German, United States and French soldiers but also those from countries like India. To keep the nationalities with their mix of languages consistent, dialogue among characters is limited to emotive symbols and vaguely accented but recognizable foreign mumbles.

Historical photos and background fill out the detail in Valiant Hearts

As Valiant Hearts progresses, gamers and would-be historians will find a wealth history laced within the action. Brief cut-scenes do well to set chapters within regional maps and shifting events throughout the war. Pop-up screens provide historical facts and beautifully color-tinted period photographs of life, equipment and stories from WWI. Players who complete puzzles within the game also collect historic artifacts such as identification tags, a whistle, a helmet or actual letters from soldiers of multiple nations. Again, additional pop-up windows takes a player back to the primary sources from which each object is drawn.

Both my 14-year-old son and I have spent time playing through Valiant Hearts this week. As a hardcore gamer, my son found the play pretty rudimentary by modern standards but my greener fingers did find at least some initial challenge to the puzzles. What we both equally delighted in was the art and historical documentation which was wrapped up around the simple human story unfolding throughout the game.

Far away from the politics, grand plans and horrors of combat, every war throughout history has come down to humans and relationships torn asunder or brought together in wartime. This is the journey of the characters in Valiant Hearts: The Great War and one well worth the trip back a century in time.

Valiant Hearts: The Great War is available for PS3, PS4, Xbox 360, Xbox One and Windows PC.