So much of history focuses on armies that it is hard to remember the vast number of civilians swept up into grand conflicts. By many estimates, more than 10 million native people occupied the North American continent through the 18th-century, and only a fraction of them were direct and active participants as warriors.

Visiting sites like Ganondagan State Historic Site is a real opportunity to step back and experience the life among the men, women and children of the Seneca and other members of the Haudenosaunee. Passing through the introductory cultural film and exhibits of the modern museum, a traditional longhouse greets visitors as a passage back in time to the true experience of the people who once populated Western New York in the centuries predating European arrival.

Within the natural light of the longhouse, central cooking fires are surrounded by stacked levels of storage and sleeping platforms. The immersive exhibit teems with traditional wares of everyday life and also reveals the influence of European trade goods. Although tour guides will caution visitors against it, one can reach out and feel the trappings of a indigenous civilian just as it was in the 17th-century and years before and after.

The 2018 Kickstarter from Sash and Saber Castings launched a broadly comprehensive line of French and Indian War miniatures. Along with the usual military models, the range presented a nice selection of Indian civilians often ignored by wargaming manufacturers.

In my pledge I included all the Indian civilians packs, including Iroquois Unarmed Men (FIW8), Iroquois Women (FIW9) and Iroquois Children (FIW10). As with everything in the range, the figures present some nice detail in naturally lean sculpts that hew toward 25mm rather than the larger, more common 28mm heroic scale models of today. The inclusion of children and adolescent figures is of particular note as these are almost completely absent in the hobby.

The full line is now available on the company’s website, retailing for $8 a pack. Taking a dive into the Sash and Saber range is endlessly rewarding whether your armies need more troops or whether you want to get some realism on the table with these native villagers of the period.

I’m always on the hunt for different kinds of figures, poses and little stories to tell by scouring through the offerings of as many manufacturers I can find. I’ve been adding more figures from Redoubt Enterprises to my French and Indian War collection, and I’ve found a number of their civilians to be good additions.

A pack of six figures of standing and firing settlers has a nice amount of diversity in poses. Two men stand at the ready, two are firing and another is waving them on in encouragement. My favorite in the set is the sculpt of the rather distinguished gentleman with a pistol extended at arm’s length to calmyly fire. I also like that half the figures are not wearing hats like the vast majority of figures found for this 18th-century colonial era.

Another kind of figure that is hard to come by is basic laborers, like those so important to the wilderness campaigns of the FIW period. Luckily, Redoubt has a very specific set of working pioneers found deep into their exetensive catalog. The package comes with two men moving fallen timber and another swinging an axe. All three wear the heavy leather aprons that worn by men doing this rough forest-clearing work.

Overseeing them and on guard are three soldiers, also included in the pack. I’ve painted them up as somewhat generic British provincials, and I usually field them with other colonial units. The six of them together on the table can find their way into a number of scenarios, especially as the lead units in the Braddock Expedition at the Battle of the Monongahela.

Combined with my wagons and other workers, these figures create opportunities to tell more of the story of the FIW. Beyond soldiers, it was the average settlers who were rallied to work or fight for both the French and British during the war. It’s great to discover more figures to act as characters in these tabletop wargaming dramas.

Gaming the scerios in the 18th-century wilderness settlement period of the French and Indian War period necessitates having some civilians models on hand. Aside from hacking an existence out of the American wilderness, settlers were often pressed into service as hastily organized militia. Incorporating this part of the era’s story into tabletop wargames makes for a lot of interest for fans of the period.

One of the most popular modern manufacturers of FIW 28mm metal miniatures is the UK-based Galloping Major Wargames. Born from the artistic skill of Lance Cawkwell, the company offers a big, ever-expanding line of figures for the period. Aside from the usual fighting units of British, French and Indian, Galloping Major carries a small selection of civilian settlers defending their homes and families, all of which I’ve snapped up.

To myself and many others, Galloping Major sculpts carry two main identifying characterics: size and personality. As 28mm models, these are defintely among some of the largest being made today. The casts are big and chunky — models hefty to hold, a joy to paint and a wonder on the table. While they may outsize some other manufacturers that veer more toward a thinner 28mm or 25mm scale, I find nothing about these models that ever makes them look too out of place with other figures once on the table.

In terms of detail and character, the company’s models are among some of the best. Particularly with these civilian figures, there is a lot of indiviuality here. The Settlers Defending packs (FIW AAC 1 and FIW AAC 2) contain a total of a dozen figures armed with guns, clad in everday clothes and topped with tricorne or broad round hats.

The real prize are the six figures in the Command and Characters pack (FIW AAC3) which contains an aproned baker or butcher armed with a blunderbuss, a preacher toting a bible and pistol, and, a man on the run with a knife drawn with a gun at the ready. The other three figures, perhaps local community leaders, are more formally dressed in long, lapelled coats and armed with pistols and swords. I chose to paint them up in provincial officer uniforms.

Having dozens of Galloping Major models, including all these civilian settlers, in my collection provides a variety of options and play opportunity, and I’m always looking forward to painting the next one. 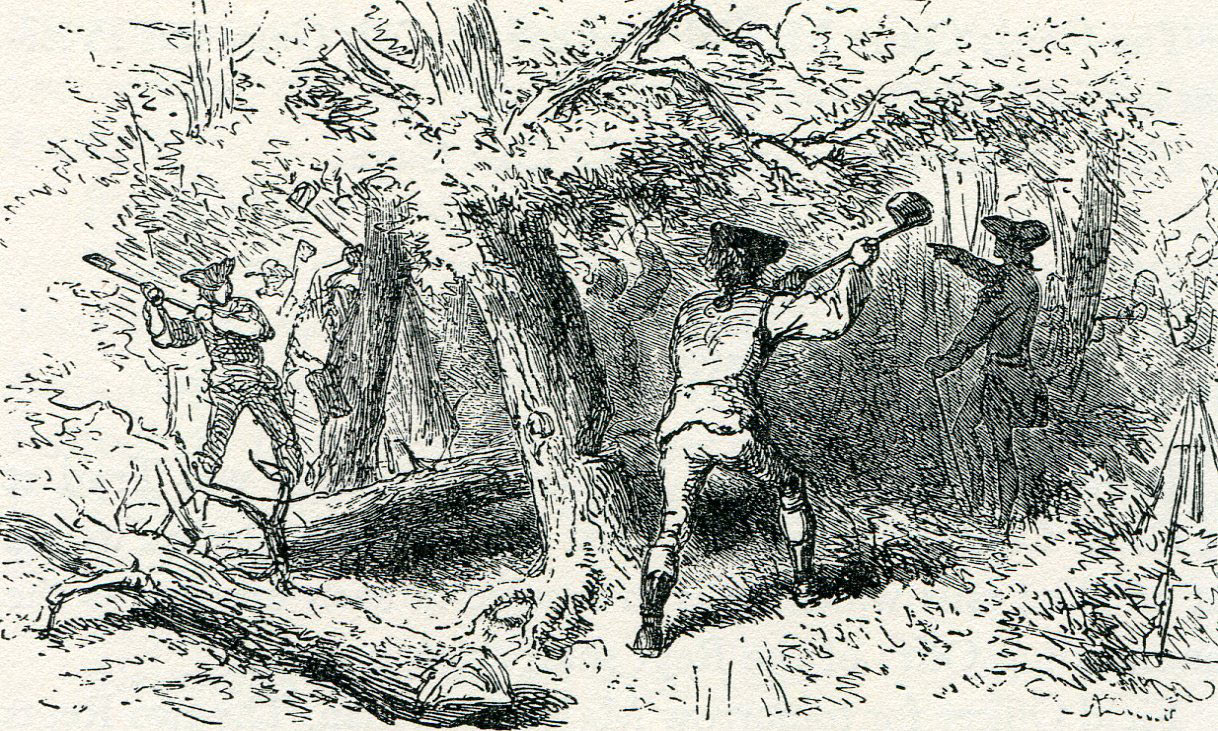 Ask the average person to describe an 18th-century army in the North American colonies during the French and Indian War and you’ll probably get a lot of images of tricorne hats, muskets and guys in regular uniforms marching in lines across open fields. The role of civilians often doesn’t come up, but their importance was of the utmost to armies of the period.

When British General Edward Braddock set off into the Ohio Country wilderness in 1755 to lay a planned siege at Fort Duquesne, his column of some 2,000 soldiers also contained civilians. These men (and a couple dozen women) served as scouts, laborers, wagoneers, animal herders, cooks, blacksmiths, carpenters and all manner of other roles commonly found in the era.

On the Braddock Campaign, scouts included backcountry notable, local landowner and fur trader John Fraser. Among the hired teamsters were Daniel Morgan and a young Daniel Boone. The wilderness expertise of these historic figures and those whose names are since lost was key in navigating the miles-long column as civilian laborers hacked their way through the woods of Southwestern Pennsylvania at a rate of just a couple miles a day.

I found a bunch of civilian figures in the flea market are at this year’s HMGS Cold Wars convention. At just a buck or two each, I managed to snag a nice variety of workers from Fife & Drum Miniatures plus some pack animals and a mounted scout from the Old West line from Wargames Foundry. The metal sculpts provide a lot of unique models which were a nice break from regular poses of the FIW French and British soldiers I’ve been collecting over the past year. Painting the civilians and pack animals also allowed for some less historical freedom and creativity.

My finished figures are going to come in handy as I build out some Braddock-themed scenarios in the coming months. Having completed a few, I’ll also be looking to add more civilians to my forces in support of the masses of troops on my FIW game tables. 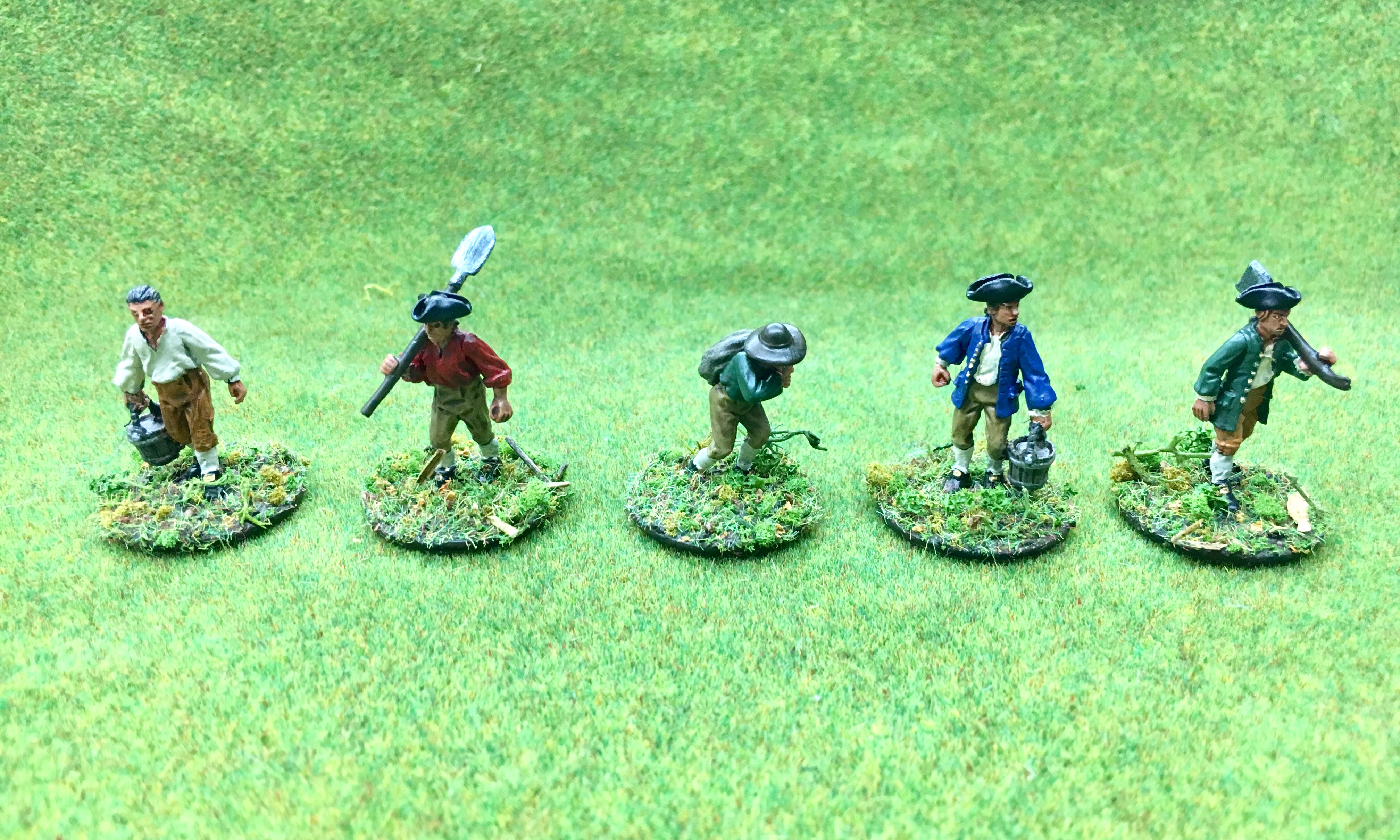 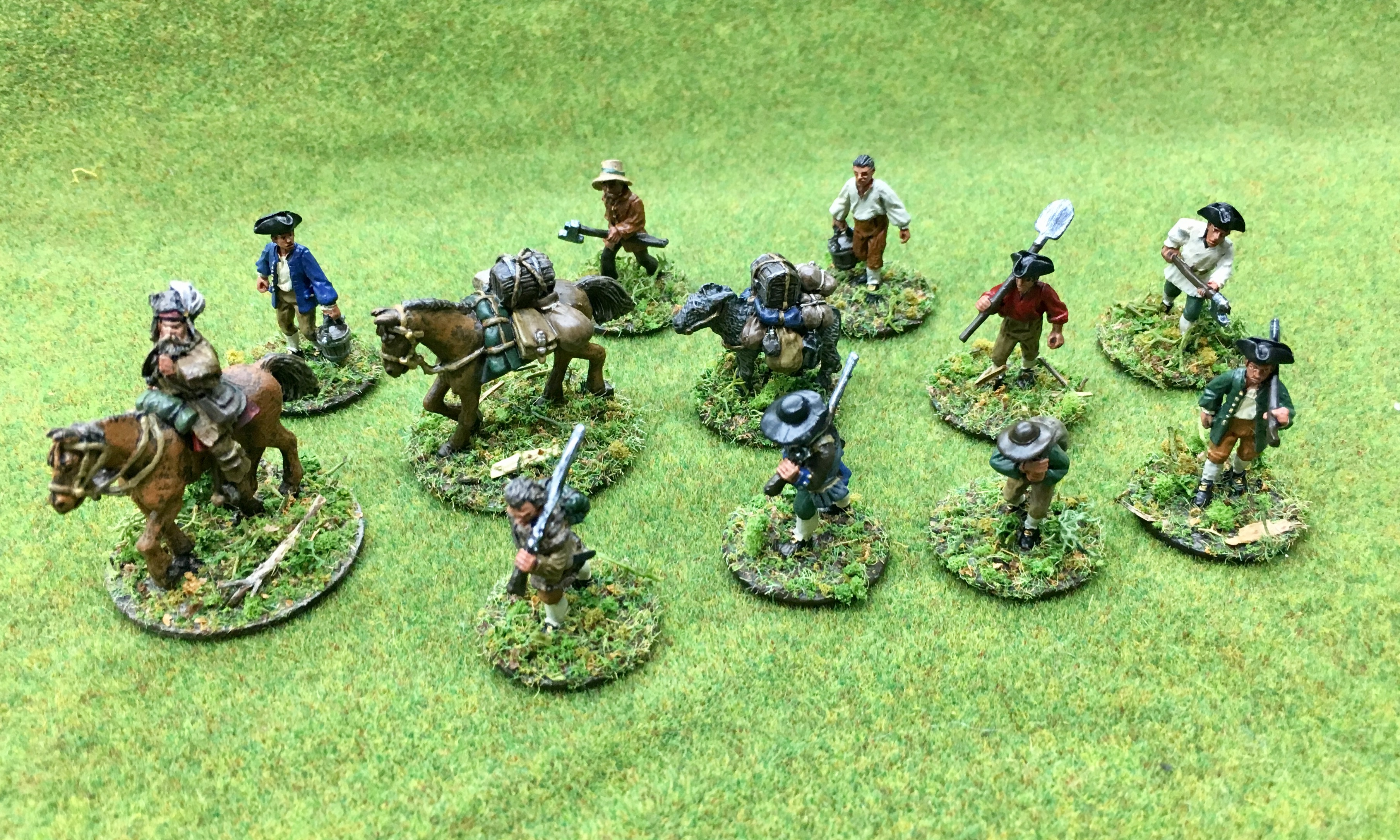