Our latest Battleground scenario at Metropolitan Wargamers in Brooklyn, NY took us back to one of our club’s sand tables and the area northwest of Ulianovo during Operation Kutuzov in July 1943. The Soviet 11th Guards Army and 1st and 5th Tank Corps led the counteroffensive action against a thin but dug in German force, resulting in some of the heaviest losses to both sides during Operation Citadel and the Battle of Kursk. 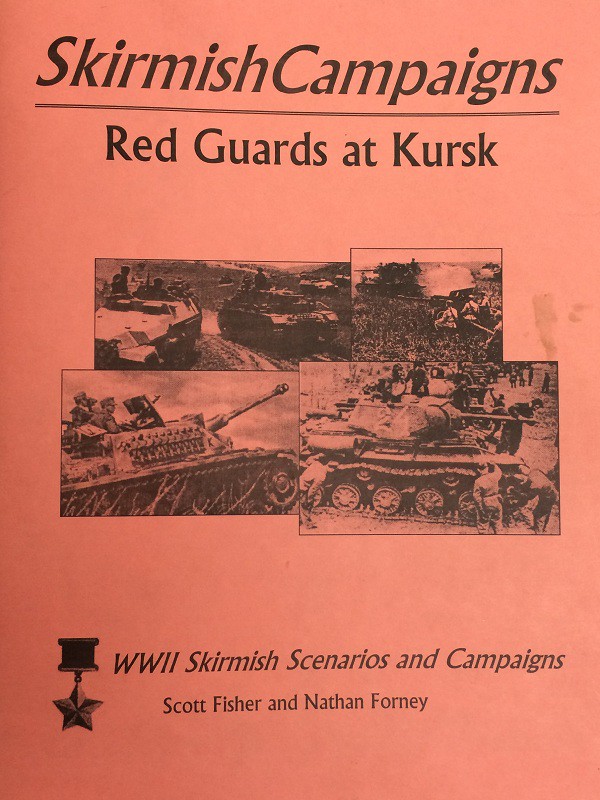 Using 20mm miniatures and the scenario from the Red Guards At Kursk book from the Skirmish Campaigns series, the game sets up a 12 turn limit with the Soviet objective of pushing tanks through the German defenders. The German side is tasked with holding off the largely armored Soviet force of T-34s and T-70s with infantry and two Pak 38 anti-tank guns.

The bleak, open table was set up with Germans in foxholes spread over half the field. The two anti-tank gun positions sat at the left rear of the German position with a mine field laid to channel the Soviets toward the river at the other side of the battlefield. Sparse wooded areas and small hill to the Soviet left formed the areas of safer ground for the Red Army’s tanks. 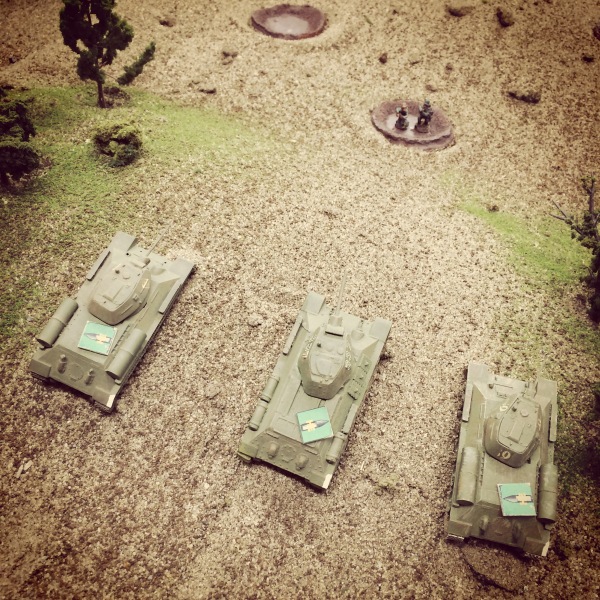 The second T-34s and tank riders move to the middle

The Soviets quickly ate up two of the game’s turns moving their first T-34 platoon forward toward the hilltop. By turns three and four, the second T-34 platoon entered at the right and the T-70s moved to the center with both groups of tanks carrying tank-riding infantry. 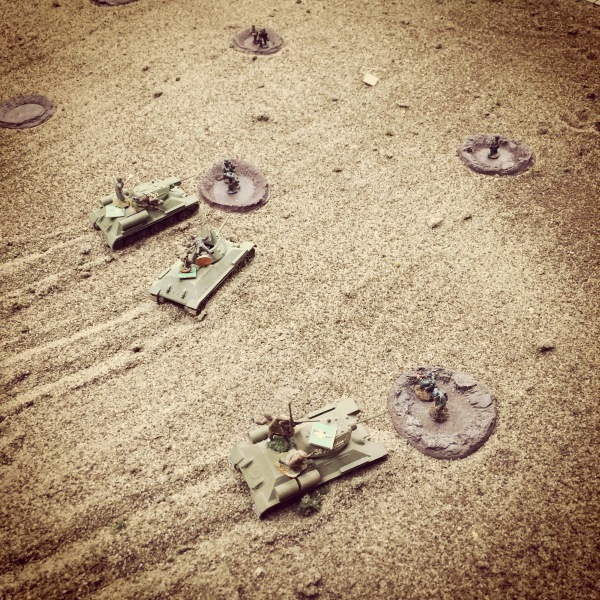 With the German anti-tank guns at too long range to effective hit the Soviet tanks, the Red Army’s armor rolled aggressively to engage the German infantry at close range. Tank riders took some initial hits but the tanks pushed in to fire HE rounds into the German foxholes, quickly causing several casualties. German infantry answered back with several soldiers effectively setting off close assaults with satchel charges being placed and several tank riding Soviets being killed.

Close engagements between T-34s and German infantry in foxholes 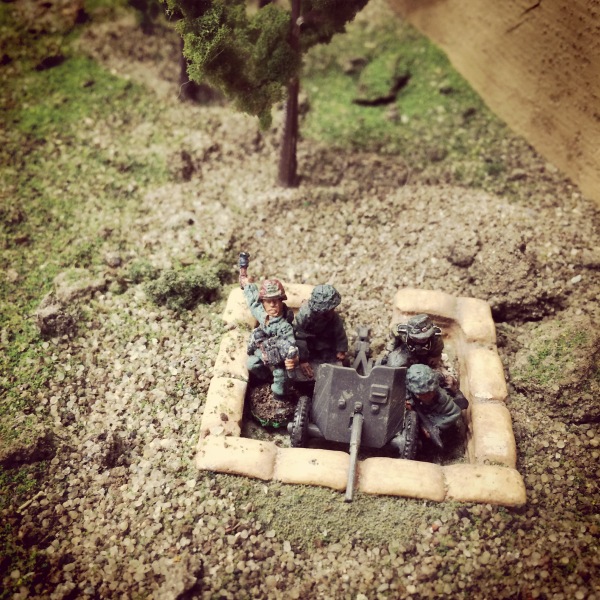 The second Pak-38 on the German left

By mid-game, one T-34 at the Soviet left had been left in flames and a second at the center had a track blown out and was permanently immobilized. The Pak-38s continued to fire rounds at long range with one more T-34 crew bailed out in a delay while they fixed their tank for a number of turns. In the meantime, the German foxholes were emptied as surviving Soviet tanks and infantry poured fire into the positions. 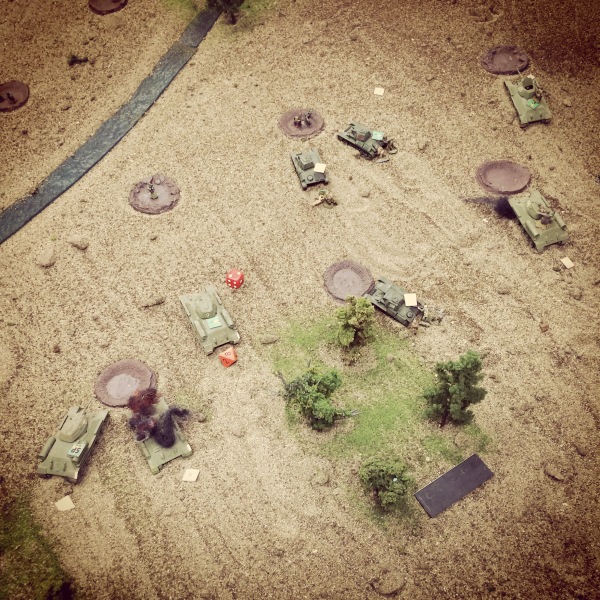 T-34s are destroyed and immobilized as they push forward

As the T-34s closed into the German side of the field, one of the anti-tank positions was completely destroyed while another had their crew eliminated. With the Germans scrambling to man their surviving gun, the three functioning T-34s raced to the river at the German right while the light T-70s cleared out resistance in the remaining center German defenses. With only a few crossing checks at the river, the Soviets were assured a victory as they continued to rattle to the German edge of the field and on to a victory by alluding the last German defenders.

With only a sparse historic defense, the Germans performed remarkably well in our replay of the scenario. The German infantry had a tall order holding off the rumble of Soviet tanks but the Red Army’s iron assuredly rammed a wedge through the bleak sandy landscape and rolled on to support the further counterattack. 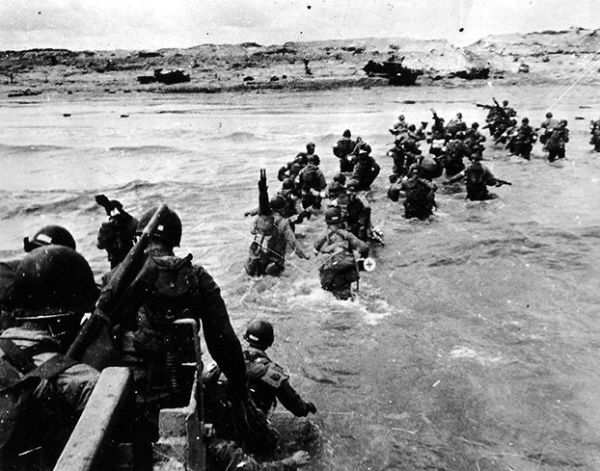 The action at the “Uncle Red” sector of Utah Beach on D-Day June 6, 1944 is a favorite at Metropolitan Wargamers in Brooklyn, NY. Using one of the club’s sand tables, we have previously run the scenario for Flames of War in 15mm, and this past week we had a go with a game in 20mm using the Battleground skirmish rules.

The US 4th Infantry Division’s landing was less murderous than the casualties experienced by the Allies at Omaha Beach, but the German 709th Infantry Division’s defense was still substantial. German fortifications eventually fell to US assaults by both infantry and timely tank support arriving successfully on the beach. 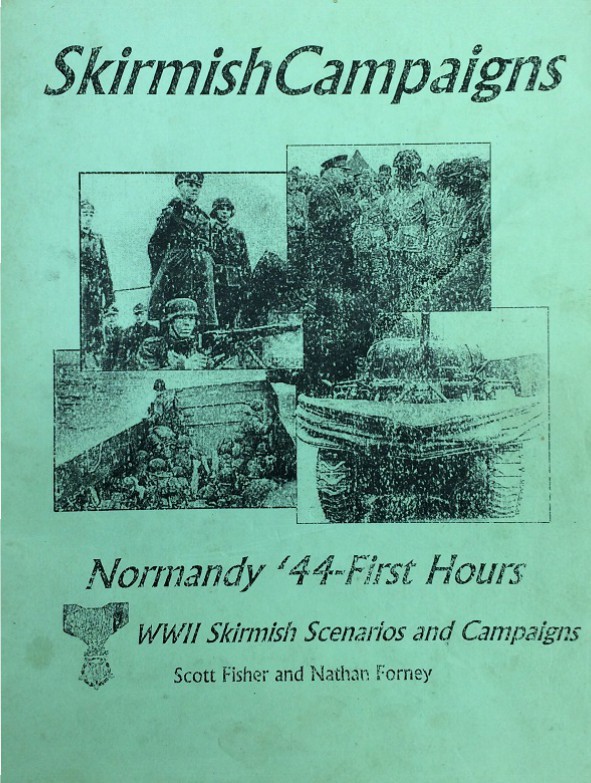 We’ve been enjoying World War II scenarios at the skirmish level in both 28mm and 20mm, allowing for a more detailed feel to our games taken from the well-researched and detailed Skirmish Campaign books, including the Normandy ’44 – First Hours book.

Table set up for the “Uncle Red” scenario at Utah Beach

The table’s layout featured a heavily-defended beachhead with German machine guns firing from three coastal bunkers, lines of barbed wire, mines and trenches carved into the sand. The short, eight-turn scenario presents the Americans with the objective of taking the three bunkers at the seawall plus one at the rear of the table. The Germans must simply hold off the US invaders from seizing their objectives.

The US 4th Infantry Division arrives in Normandy 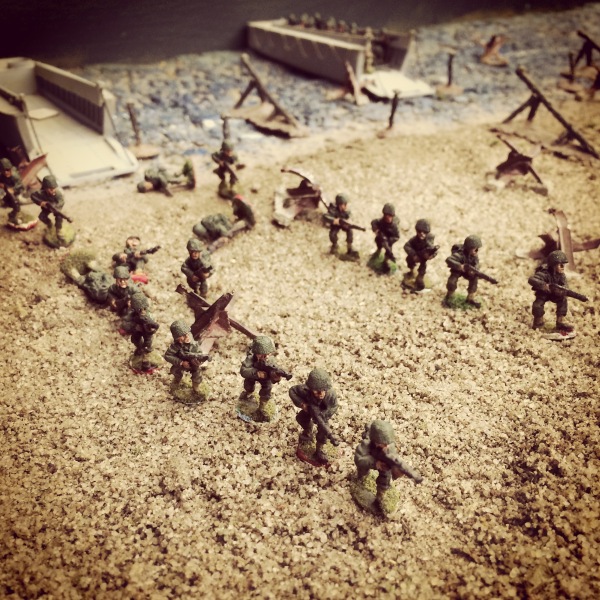 US soldiers hit the beach

US arrivals began with one boat of infantry arriving in each of the first two turns. The Americans used both of their actions in each turn to push forward on the beach with an eye on assaulting the bunkers at the German center and left. 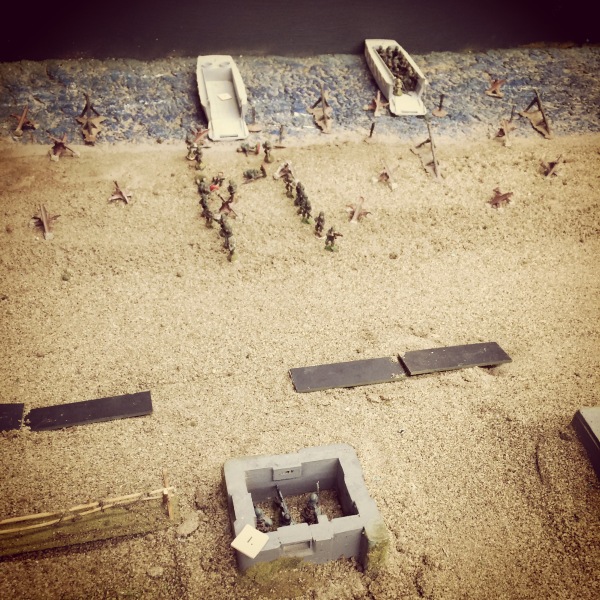 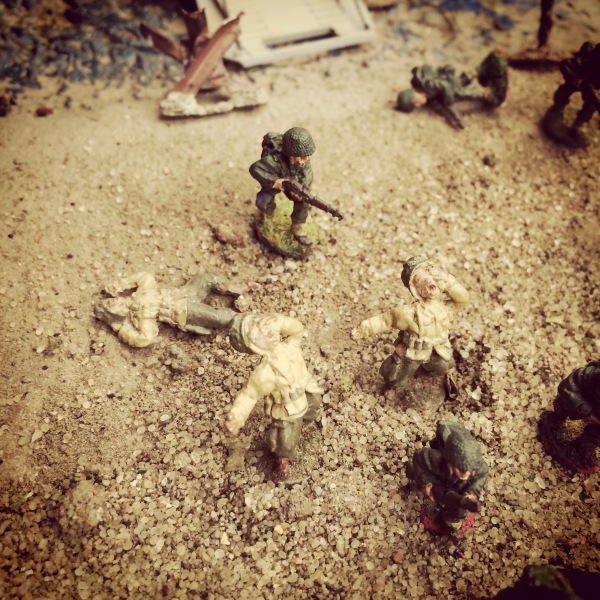 Under no cover on the open beach, the US soldiers took heavy crossfire from German machine guns in each of the three beach bunkers and one squad of infantry tucked behind barbed wire in trenches. The first two turns were deadly. One American squad were reduced to half strength by the time they pushed toward a gap in the minefields and on to their first bunker objective. Combined fire from the US poured into the bunker, cutting the German machine gun’s crew to a barely functioning unit as the Americans swarmed forward. 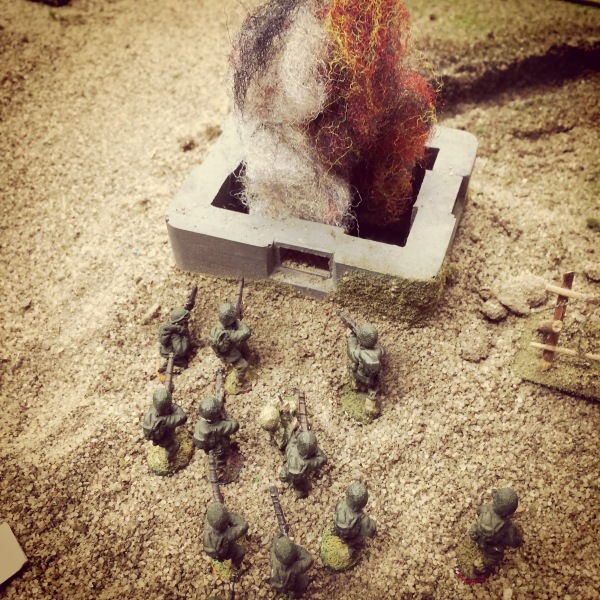 By turn three, the Germans in the trenches had shifted left to cover the oncoming Americans just breaching the seawall. In a close frontal assault the first American squad managed to lob a grenade into the German bunker, incinerating the remaining machine gun crew inside. With one objective one, the GIs set their sites on the bunker at the rear of the table beyond trenches, barbed wire and weakened German forces.

US engineers light up a German bunker with a flamethrower

The US Sherman and final boat of engineers arrived in turn four and immediately made way for the right side of the German lines. Exploiting a gap in the wire, the fresh squad made quick work of the bunker on the German right with a blast from a flamethrower in turn six. German infantry at the center trench were cut up through combined HE rounds from the Sherman on the beach and close fire from the encroaching American squad. 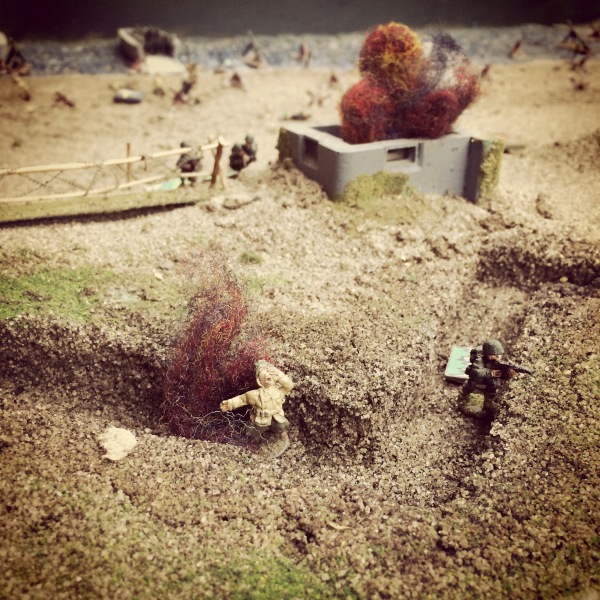 US troops get bogged down under German grenades and gunfire

Back at the German left, the initial US success became hung up in a tangle of trenches and barbed wire just beyond the burning bunker. German survivors at the second row of trenches tossed grenades and opened fire on US troops, and the Americans answered back likewise. In the bloody close action, the Germans offered just enough delaying actions while taking heavy casualties. By the time the Germans began to break in turn seven, the American forces were in no position to seize their final two objectives by the game’s end. Despite the aggressive American fight, the beach was held by the Germans.

Having played the Uncle Red scenario now several times using Flames of War rules in 15mm, we really liked the nuance of play at the skirmish level in 20mm. At the larger scale, individual losses and heroic actions seem to mean more and can swing the game from victory to defeat in a heartbeat on the sandy tabletop beach of Normandy.