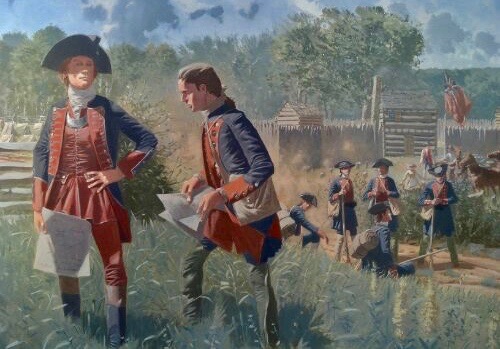 With French eyes on the contested Ohio Country and Western Virginia, in 1754 British Colonial Governor Robert Dinwiddie called for the raising of provincial infantry to protect the frontier. Commanded by Colonel Joshua Fry and a young Lieutenant Colonel George Washington, the Virginians would be present at the very start of the French and Indian War at an encounter gone badly at Jumonville Glen in Western Pennsylvania in May 1754. Washington’s eventual promotion to Colonel commanding the Virginians in 1755 during disastrous experiences at Fort Necessity and with the Braddock Expedition would shape his future leadership both on and off the battlefield.

I was fortunate to be recently gifted fifteen Provincial figures from Galloping Major Wargamers. These excellent sculpts are on the bigger side of the 28mm miniature spectrum, representing a classic “true 28mm” with stocky, detailed and well-posed figures. The models are equipped so as to represent a variety of the Provincial forces in the British colonies during the era, allowing for a lot of flexibility for painters and gamers.

The challenge in painting models of the FIW period can be in choosing what uniforms to base color schemes on. From my research I was able to tell the  Virginia Provincials went through two distinct uniform designs. The first, from about 1754-1755, featured a boldly in red — red coats with red cuffs and turnbacks, red waistcoats and red breeches. The later uniform adopted in 1756 through the end of the conflict featured a dark blue coat with red cuffs and turnbacks, red waistcoats and blue breeches. The 1772 portrait of Washington by Charles Willson Peale captures a heroic depiction of this later uniform style. In reality, both uniforms probably overlapped in use and at times the undersupplied provincial units would have resorted to using whatever equipment and clothing was available.

I chose to paint my provincials in the later blue coats so as to make them stand out from the other allied British redcoats on the gaming table. To my eye, the later uniforms somehow look “more American” as the Virginians exited the war already sowing the seeds of the Revolution against British Crown rule to come over the next two decades. 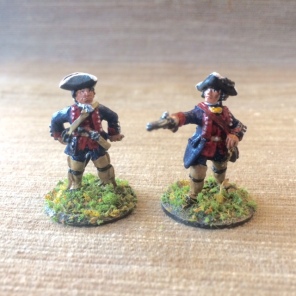 As stated above, these Galloping Major castings feature some great personality. The command figures, one with a sword drawn behind his back and the other with his pistol at the ready, really carry a lot of presence on the table. The drummer stands resting as is catching his breath before the next command beat through his drum. Even each line figure, either loading or firing, has slight tweaks to their pose or equipment to show each miniature as an individual within the Virginia Provincial Regiment.