By the time open conflict between French and British forces erupted in the French and Indian War in 1754, the French were well experienced with the challenges posed by the North American wilderness. In varying forms, the Compagnies Franches de la Marine made up the majority of the defenders of the colonies of New France for about 100 years. Operating from Canada, their skill in adaptive combat made them ubiquitous in engagements large and small throughout the FIW, including the Battle of the Monongahela, the Siege of Fort William Henry, Battle of Snowshoes and the Battle of Fort Carillion.

Warlord Games offers a boxed set of Compagnies Franches de la Marine featuring twenty metal models from Conquest Miniatures. Conquest’s castings tend to be on the smaller side of 28mm scale — a bit closer to 25mm in my experience. That said, I’ve found my experience with their various FIW ranges to be excellent and full of detail. This set of one officer and nineteen soldiers armed with muskets is a fantastic way to get a couple units on the table usable in a variety of scenarios throughout the FIW.

Uniforms for the Compagnies Franches de la Marine were officially quite similar to regular French troops with white jackets with blue cuffs and turnbacks, blue waistcoats, blue breeches and white trousers, all topped with a yellow-laced tricorne hat. More commonly the irregular nature of these units assignments in the field led to more adaptive uniforms and gear. Slouched  blue and white forage hats, loose shirts, leather leggings and colorful sashes were used in a combination of looks. Daggers, hatchets and short swords filled provided practical frontier weaponry. Bags, satchels and jewelry — often traded with close Indian allies — allowed individual French soldiers to individually kit themselves out as they saw fit.

The lack of formal uniforms in these soldiers makes for a lot of the fun in painting them. Using my imagination allowed me to field a model who could be used as a scout dressed in a long fringed leather buckskin coat (above, left). The included officer model (above, right) maintains his more formal appearance with his tricorne hat and dress uniform while gesturing a command with his left hand and leaning on his musket with the right.

The remainder of the models each carry a unique poses of their own, making these Frenchmen pleasure to paint and a nice break in the action from the regular 18th-century uniforms so present during the FIW and on the gaming table. 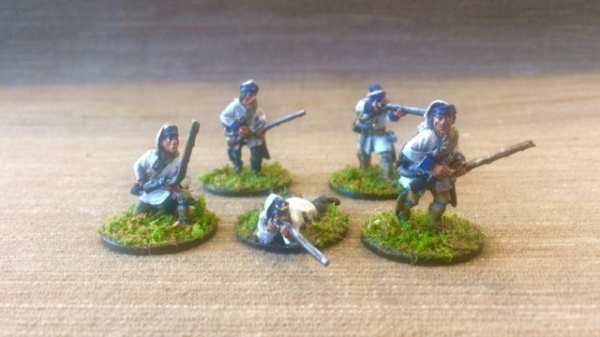