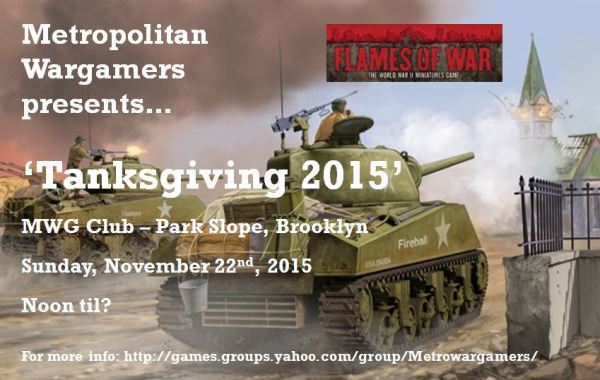 For the third year running, we’ll be hosting a day of armored Flames of War tank battles on Sunday November 22nd, 2015 at noon at Metropolitan Wargamers in Park Slope, Brooklyn. This year we’ll be taking over the entire back room of the club running multiple Late War Europe games using 1900 points of armored forces on a side. US, British, German and Soviet armies will rolling and fighting on tables filled with beautiful terrain, so experienced players can bring their own forces or newcomers are welcome to just come along, push some armor, roll some dice learn the game.

You can check out the photos below from our previous Tanksgiving events from 2014 and 2013, and more photos and after action reports can be found at the links in the captions. 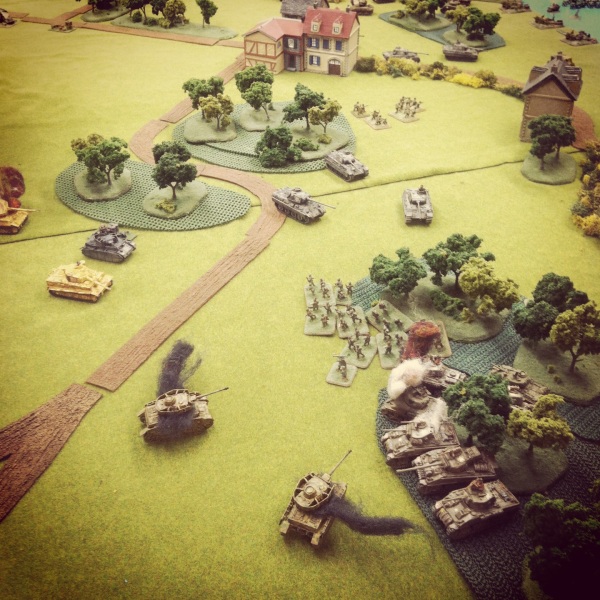 US and German forces clash during Tanksgiving 2013

This year’s Tanksgiving 2015 will be held at Metropolitan Wargamers at 522 5th Street in Park Slope, Brooklyn (enter through basement level). Visitors pay just $15 and regular club members are free. The event will be a great opportunity for new people to meet some of us at the club and experience the New York City’s premier wargaming community. If you’d like to come, RSVP via our club’s Yahoo group.