I’m a longtime miniatures painter in multiple scales and periods, but the 18th-century has always intimidated me. Large masses of European troops standing in lines, a sameness of pose and uniform bedecked with multicolored facings and detail all seemed a bit much. And if I was going to be playing the French and Indian War I was going to need British Redcoats – lots of British Redcoats. 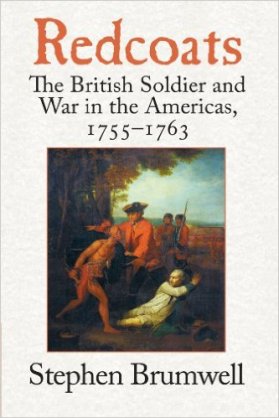 I turned to a couple books to stoke my interest I turned to a couple books focused on my soon-to-be subjects. An old standby in the hobby is Osprey Publishing, and I picked up a copy of 1996’s British Redcoat, 1740-93 by Stuart Reid. While good for a few detailed illustrations by Richard Hook, the slim volume also gives a solid intro into the recruitment, training and life of a British soldier of the period. My interest piqued, I dove deeper into the topic with Stephen Brumwell’s Redcoats: The British Soldier and War in the Americas, 1755-1763 from 2002. The book is scholarly yet very readable, and Brumwell goes a long way in smashing common myths about English soldiering during the FIW.

With inspiration fired, I picked my first set of metal figures in the British Regular Infantry box offered by Warlord Games. Made from castings by Conquest Miniatures, the box comes with a nice selection of 18 models: four men firing, eight marching aggressively forward and a six-man command group including two flag bearers, a drummer, two junior officers and a commander.

I decided to paint my first British soldiers of the period to represent the 44th Regiment of Foot due to their role in the Braddock Expedition, the Battle of the Monongahela and other major engagements of the FIW. For my first time painting facings, I also thought the bright yellow against the red of the 44th Foot would also pop nicely on the table.

My first test redcoat with basic colors blocked in

After basing the models on washers, filling the bases with rough wood filler and spraying a black primer coat, I blocked in the colors. I didn’t get carried away on exact colors, relying on a basic red for the coats, waistcoats and pants, basic yellow for the facings and a brown buff for the leggings. The cuffs were done in two steps, first with a bright white and then finished with a thin line of yellow. With a fine brush, white details were added on the basic black tricorn hats and on trim to the waistcoats and lapels.

Halfway through my first batch of British Redcoats

Details were finished off with the same brown buff on stripes and belts, a basic brown to the guns and metal to finish off the guns, bayonets and officer swords. Finally, flesh and eyes were painted. Exposed skin and the leather leggings and straps got a careful light coat of brown wash to finish the painting. Flags were made by photocopying those included in the Warlord box, the bases were covered in my new favorite groundcover – Green Adirondack from Scenic Express. 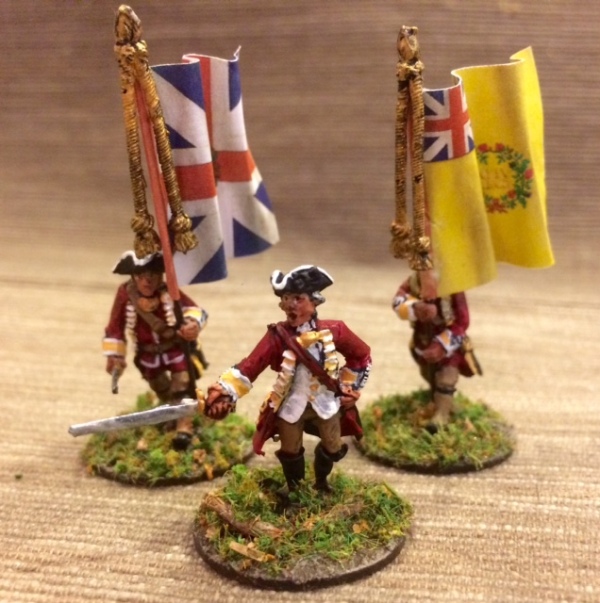 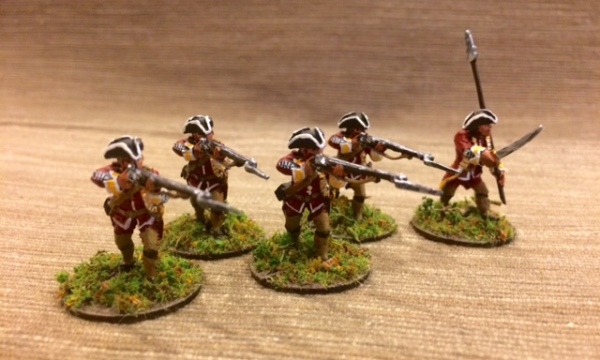