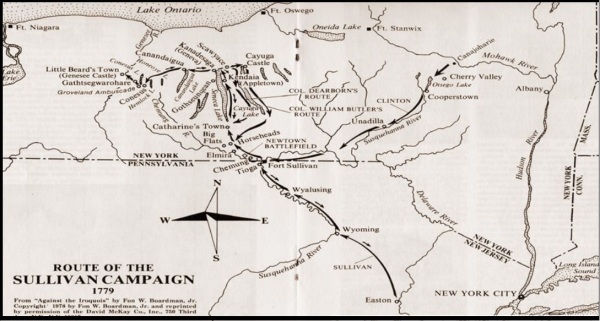 As I’ve written here many times before, I grew up amid the fields of great wars which shaped world history for more than two centuries hence. These conflicts of the 18th-century — the French and Indian War and the American War of Independence — partially played out in my childhood backyard of Western New York State. It was there in the 1750s-1780s where the European powers of France and England, many American indigenous civilizations and upstart Colonial settlers clashed over the continent savagely and ultimately formed the North American continent we know to this day.

A few months ago I had occasion to journey back again from my current home in Brooklyn to my original hometown in the Genesee Valley of Western New York. In doing so, I was able to partially retrace the movement of once-great alliances of armies and tribes of 1779. 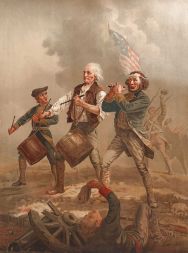 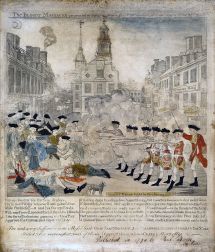 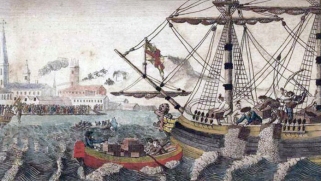 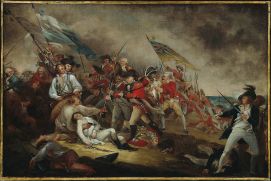 Idealized images of the American War of Independence

Tracing the route of the Sullivan-Clinton Campaign uncovers some of the complexity to the story of the American Revolution and the country’s creation myths. Like most Americans, my view of the War of Independence was shaped at an early age with idealistic impressions of the era, its events and its legendary personalities — the Boston Tea Party, the Boston Massacre, Colonial Minutemen firing at British Redcoats, Paul Revere’s ride, Washington crossing the Delaware River, Betsy Ross sewing the first American flag and Molly Pitcher at the Battle on Monmouth. The portrayal of history with a heroic flourishes is not uncommon for sure, but stops along the Sullivan-Clinton Campaign route boldly reveal where many of our gaps between legend and reality persist in how we interpret our history. 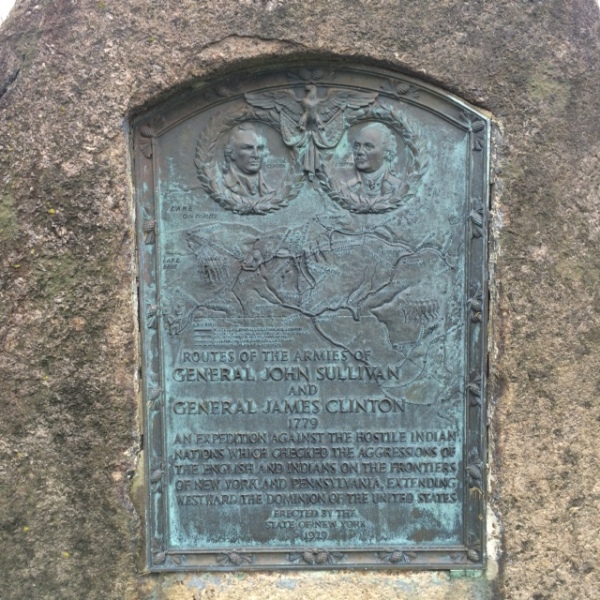 By the summer of 1779, the American Revolution was at its midpoint. The surrender of the British at the Battle of Saratoga in October 1777 encouraged France to join the war in 1778. Even with much-needed support flowing to the Colonies, the alliance between the Iroquois Confederacy and the British was holding the New York State frontier in the hands of England. Encouraged by British and Tory sympathizers operating from Fort Niagara across Western New York, the Iroquois harassed and killed settlers in the Mohawk Valley and also provided support to the British army in the form of food supplies.

In retaliation, General George Washington set his eyes on crushing the Iroquois alliance to “war upon them in their own style; penetrate their country, lay waste their villages and settlements.” The task was assigned to Major General John Sullivan with Brigadier General James Clinton acting as second in command. Sullivan set off northwest from Easton, PA and joined Clinton at Tioga near present day Athens, PA at the New York border in August 1779. Against military tradition, Washington assigned a major portion of the Continental Army (four brigades of over 4500 men) away from the front against the British. Committing such a sizable amount of men and supplies to the back country campaign points to the importance Washington placed on the mission. 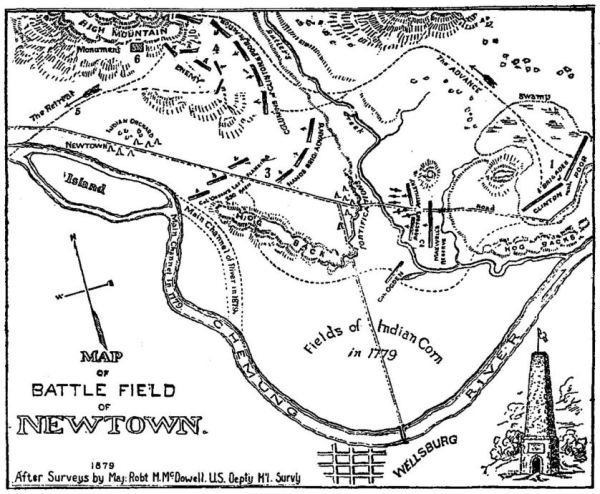 Setting out from their encampment on August 26, 1779, the well-supplied columns of the Clinton-Sullivan force marched along the Chemung River. Three days later, the expedition encountered Royalist forces comprised of a handful of British regulars, a couple hundred Tory militia and perhaps 1000 Iroquois warriors lying in wait in well-hidden earthworks. 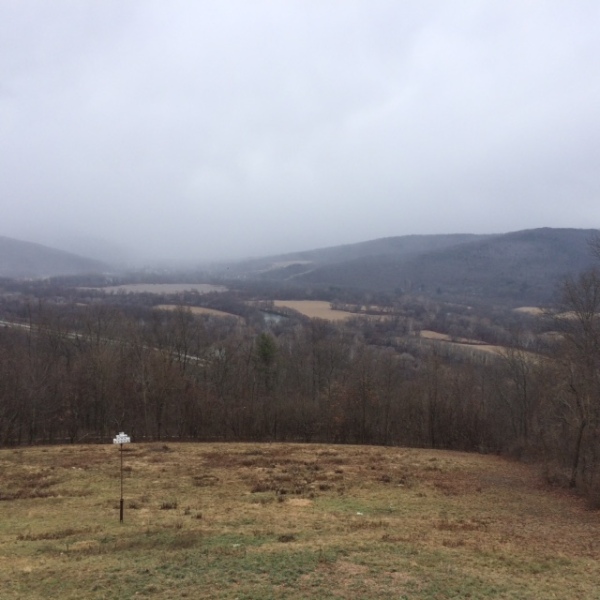 A view from atop the Newton Battlefield park

The militia at the Battle of Newtown were the famed Butler’s Rangers, commanded by Loyalist John Butler. Butler’s relationship with the British stretched back to the French and Indian War with his irregular troops participating in a number of key battles in Upstate New York and the Northeast region. Known for their green jackets and tactics which departed from standard 18th-century European line fighting, Butler’s Rangers were well-adapted to fighting in the thick woods of the American frontier. Leading the Iroquois at Newtown was Joseph Brant, a Mohawk who had likewise begun his military career fighting alongside British forces in the French and Indian War. 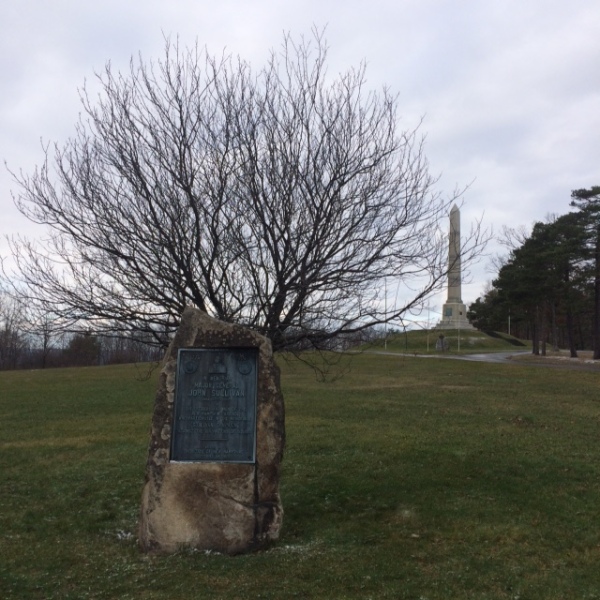 Monuments to John Sullivan and the battle at Newtown Battlefield

Despite their dug in positions, Loyalist forces were greatly outnumbered at Newtown and a plan was quickly devised by Sullivan once the enemy’s presence was revealed. With Colonial cannon fire pouring into Loyalist positions, flanking troops were sent east and west. Despite relatively low casualties on both sides, the Loyalist forces ceded the field. The Battle of Newtown, the largest engagement of the Sullivan-Clinton campaign, left a lasting impression on the Iroquois in particular who retreated from the Colonial’s guns and superior numbers. 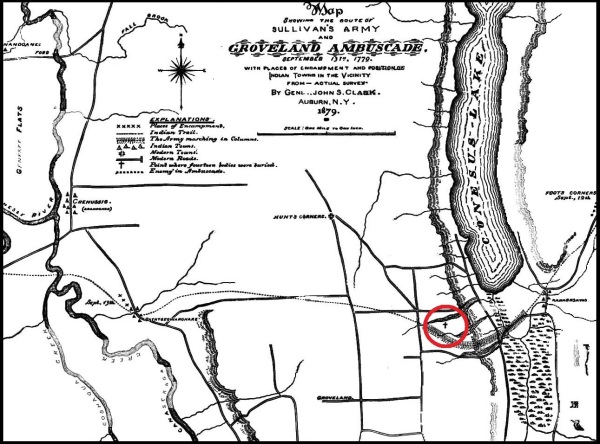 Map of the Genesee Valley and the site of the ambush of the Boyd-Parker expedition on September 13, 1779

After Newtown, Sullivan and Clinton continued marching northwest. With the Iroquois on the run westward, the Colonials cut a swath of destruction against largely civilian tribes people. Fields of crops were cut down and dozens of villages were burned. What we would deem today as atrocities were meted out on the Iroquois population of the Finger Lakes Region with Washington’s orders of a scorched-earth mission delivered mercilessly. 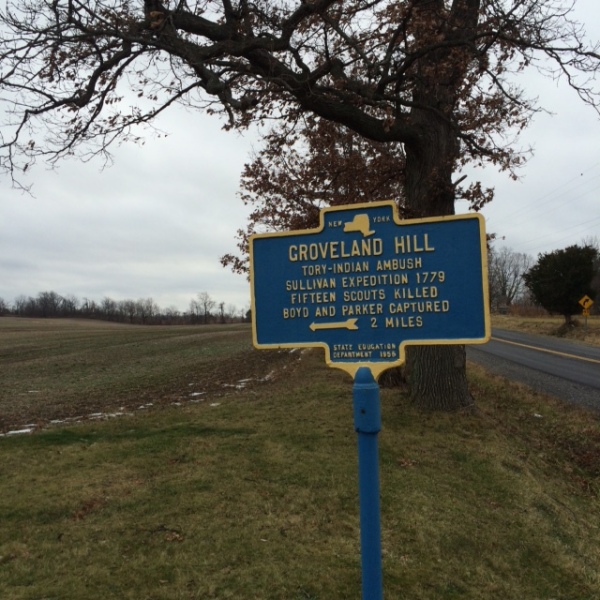 By mid-September 1779, the Sullivan-Clinton expedition had reached up through the Genesee Valley. In the dense terrain differing from the wider fields of Newtown a month prior, the Colonials were slowed and at a disadvantage without opportunities to use their cannon effectively. On September 12, Clinton assigned Lt. Thomas Boyd, Sergeant Michael Parker and just over 20 men to find the Iroquois village of Little Beard’s Town. Lying again in ambush were Butler’s men and hundreds of Senecas. 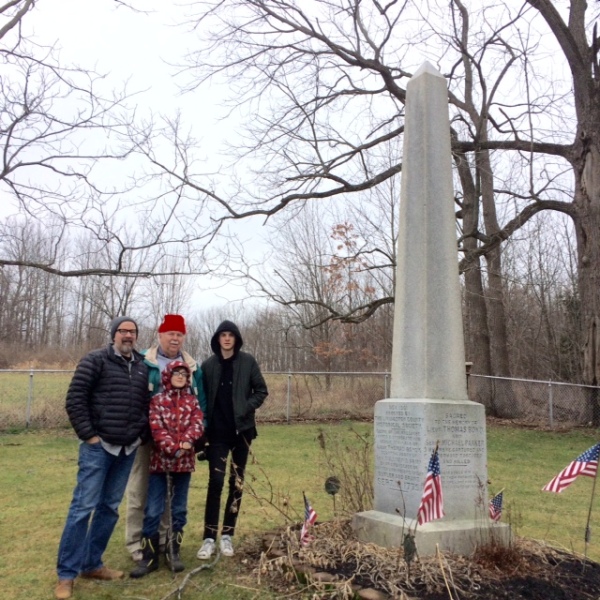 Me, my father and sons at the Groveland Ambuscade monument

The following morning on September 13, 1779, Boyd’s scouting party engaged in a brief gunfight with a half-dozen Senecas near Conesus Lake and present-day Groveland. Against the advisement of his guide, Boyd pursued the Indians into a trap where they were quickly surrounded by Butler and Brant’s large force. In the ensuing ambush, about a dozen of Boyd’s men were killed. As the smoke cleared, another twelve men were captured along with Boyd and Parker themselves. Today, the Groveland Ambuscade park and monument marks the place of this quick and yet bloody skirmish. 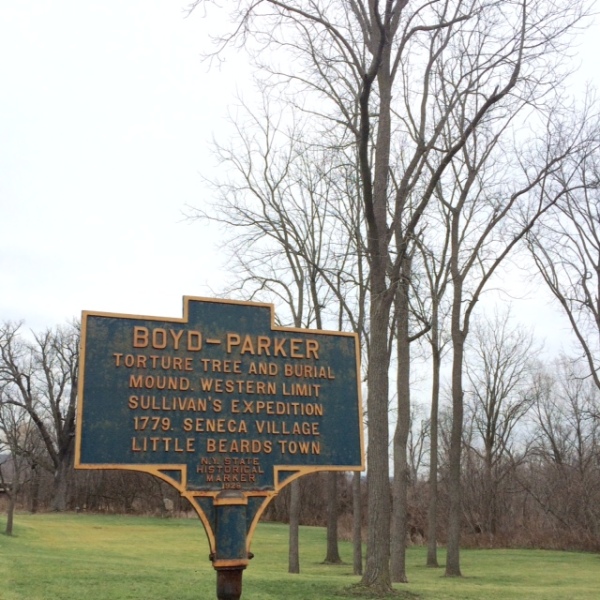 The captured Colonials were led to nearby Little Beard’s Town some five miles west of the ambush near present day Cuylerville, NY. After enduring a summer of unrelenting viciousness at the hands of the Sullivan-Clinton campaign, Brant was anxious to confront his now-imprisoned enemies face to face. With his questioning over, Brant left the men to the Senecas who tortured and killed Boyd, Parker and all but one of their men. 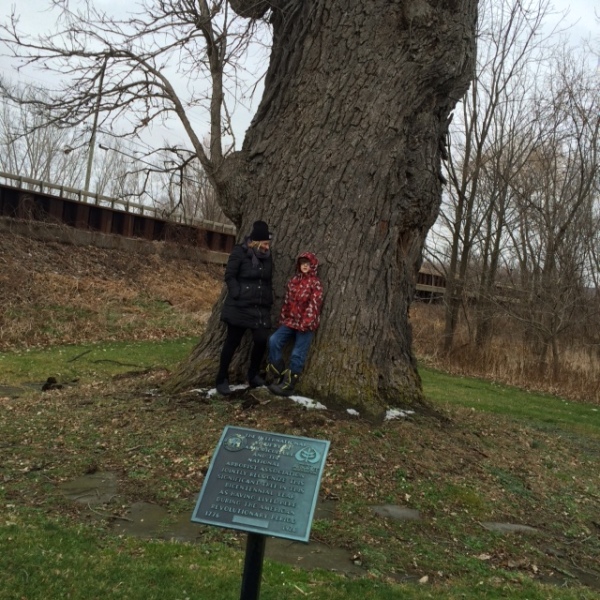 My wife and son at the Boyd-Parker “torture tree”

The centerpiece of the present day Boyd-Parker Park is the infamous “torture tree.” Soaring over 70 feet high and some 24 feet in circumference, the 250-year-old bur oak tree is a direct living link to the past events of the valley centuries ago. While legend has it the tree is the actual spot where Boyd and Parker met their end through horrendous acts of torture, the name is dubious since no actual documentation exists to prove the exact tree’s location.Two days after the deaths of the Boyd and Parker’s group, Sullivan’s main force arrived to destroy Little Beard’s Town and bury their comrades. 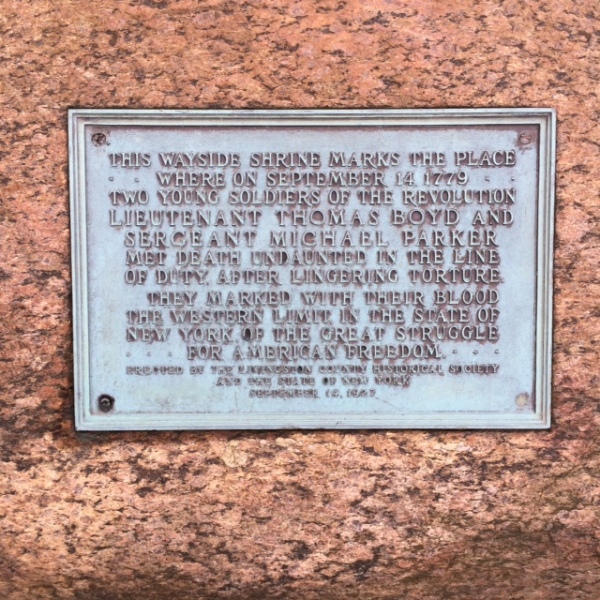 One of many plaques at the Boyd-Parker park

In the weeks following the events in the Genesee Valley toward the end of September 1779, Sullivan and Clinton’s expedition force began to disband to winter quarters. While a decisive blow had not been dealt to the Iroquois, thousands of Indians were dispersed throughout Western New York and into Canada as winter set in with starvation and disease devastating the already weakened population.

Memory of the Sullivan-Clinton Campaign

Touring the landscapes and monuments of the Sullivan-Clinton Campaign in the Genesee Valley is a remarkable experience. Attempting to place yourself back in a time of a region dotted with large Indian towns, large fields of mature agriculture and scattered white settlers takes a great leap of imagination. The modern plaques and signage along roadsides and memorial parks document the events of 1779 with words like “hostile” and “aggression” applied repeatedly to the Iroquois who peacefully lived their lives for centuries before becoming embroiled in the wars of Europeans and American colonists. On the flip side, the upstart Colonials who set on a single-minded destructive campaign against the locals are portrayed heroically as “undaunted” and sacrificially giving their blood for “American freedom.” Following the trail of history today leads to ongoing battles of a different sort — battles to square the nation’s history myths with the realities of the events of over two centuries ago.