This month, Battlefront Miniatures, the makers of the popular World War II miniatures game Flames of War, took its first big digital step forward with the introduction of the first of their two new digital services — Forces of War. 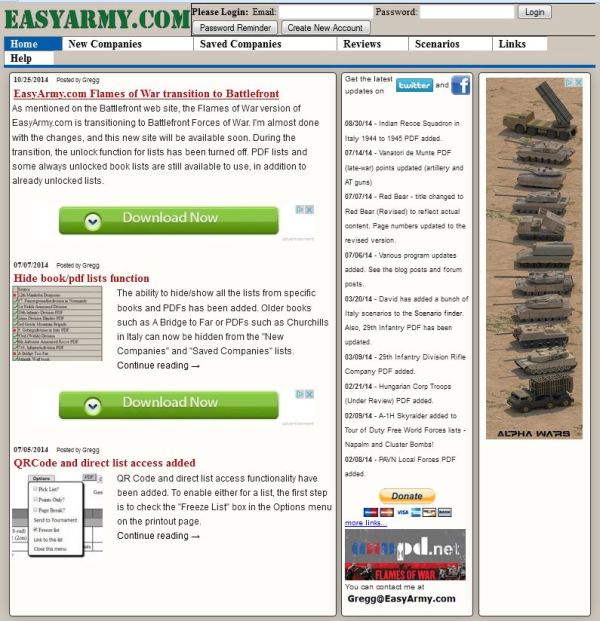 Debates have been raging through online message boards, Facebook groups, Twitter and over WWII-themed tabletops ever since the announcement that the beloved EasyArmy was being closed down and absorbed into Battlefront with Forces of War. During its run, EasyArmy had become a much relied-upon tool for FOW players worldwide. Battlefront has maintained a lengthy working relationship with EasyArmy’s designer in an incredibly rare example of a corporation willing to cede some control of their intellectual property. Now, like so many other companies working in the digital space today, Battlefront has brought the ideas and work of a passionate outsider in-house with this month’s launch of Forces of War.

The New Companies menu on Forces of War

Beginning with Forces of War, buying a company list will run $1.00 USD with a 25% discount extended when buying all lists from an entire book or compilations at about $16.50 USD. The initial offering of lists is meager, focusing on the more recent FOW books Road To Rome, Barbarossa, Road To Remagen and the World War I themed Great War. Devil’s Charge is listed but the complete book is not available and instead points to the popular Panzers To The Meuse list. This set of German companies is the only free offering at launch, allowing for some limited experimentation with the site before buying additional lists. Being a Late War player who mostly plays US and British lists of the D-Day, Market Garden and Battle of the Bulge operations, my hope is that FOW quickly updated Forces of War with these lists as well as Eastern Front lists for Late War Russian and German players. 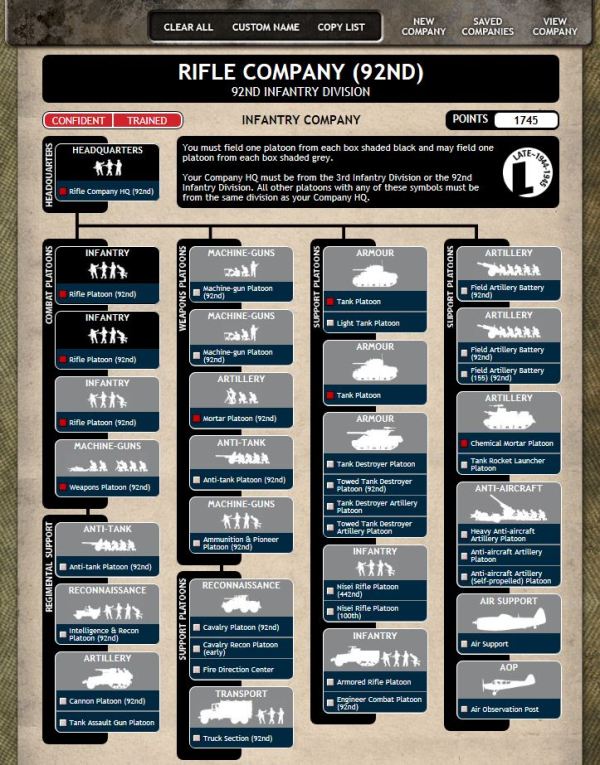 Company builder on Forces of War

As a test, I went through the quick PayPal process of buying the US 92nd Infantry list from the Road To Rome book. The performance was familiar to my experience on EasyArmy, although I did find the Forces of War site to be somewhat faster than its predecessor. Within a platoon, options are selected with simple clicks, and a running points total is tracked along the top of the page by company and platoon. Forces can be saved with custom names and a nice (but minor) new feature allows notes to be added within each platoon. 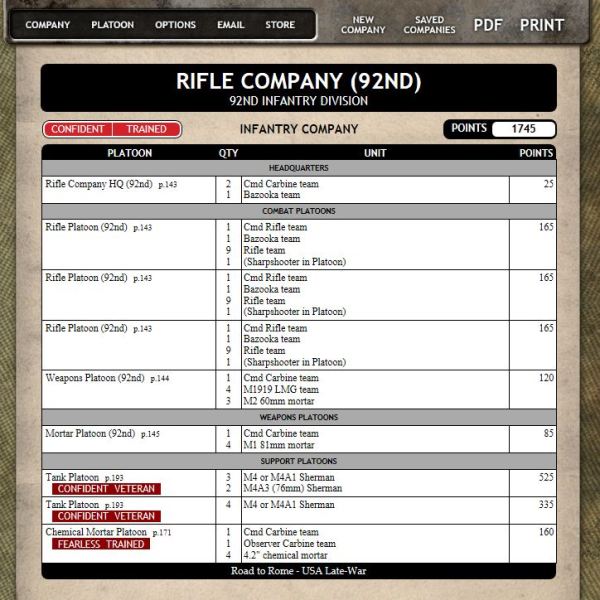 A sample Saved Company page on Forces of War

Saved companies are accessed through easy to view lists which can be filtered by period, country, type, name, source, motivation and skill. Companies can be exported and saved as PDFs or printed. The printed lists are somewhat clearer with better page breaks than those with EasyArmy, a simple but welcome tweak. Frustratingly, the platoon motivation and skill ratings still print within unnecessarily colored text boxes which are nearly unreadable on the page.

Scenarios selector on Forces of War

Most other aspects of EasyArmy have been ported over to Forces of War, including the handy Scenarios map. The Scenarios page could use some upgrades with a search or menu feature to allow quicker access and some better designed graphics or links.

Much like EasyArmy before, Forces of War offers an easy interface in which to view and manage force lists for FOW. In a nutshell, all the core functionality of EasyArmy has been preserved and then packaged with an official FOW wrapper.  Like a lot of players, I would have very much liked to have seen more lists available at launch. As more lists become available in the coming months, re-buying lists already purchased via EasyArmy is also a sticking point for many but I find the new pricing scheme to be completely in-line with FOW balancing customer usability with needed company profit. Some will also continue to complain about the inaccuracies in some lists, but clean-up edits over time, cross-checking the books and being a considerate, mindful and fair player will always trump any gaming tool.  Gone too are all the ads which cluttered the layout of EasyArmy — a true step forward for any premium digital offer. As transitions go, the evolution of EasyArmy to Forces of War is a good start with room for greater improvements to hopefully occur in the very near term.