The long Memorial Day weekend was as good a time as any to roll up my sleeves for a big day of wargaming, and the Dust Tactics Regional Tournament at the Compleat Strategist in New York City on Saturday May 25th was the place to be.

I signed up my son and I for two slots in the small tournament organized by a fellow club member at Metropolitan Wargamers in Brooklyn. The two of us were newbies to Dust Tactics but I had certainly read a lot about it since its release last year by Fantasy Flight Games. Dust Tactics is an alternate reality WWII-era game where alien technology is discovered by Germany in the late 1930s and goes on to shape a world of warfare between the Axis and Allies throughout the 1940s. 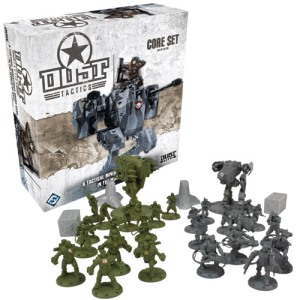 As is expected with FFG releases, Dust Tactics is a gorgeous game ready to play straight out of the box for about $80 retail and cheaper online. The core set comes with a dozen infantry forces for each side plus heavily-armored walkers. The box contains two two-sided fold-out gaming mats , special dice, rules, a scenario guide, reference cards and a few rudimentary plastic terrain pieces. There’s a large variety of additional accessories, campaign expansions and army packs available in the price range of $15 to $45. All this makes Dust Tactics very collectible and flexible as a gamer’s interest expands and wallet can abide. The models are gorgeous and mostly pre-assembled at a hefty 1:48 scale with a visual appeal bridging interests from WWII into a dystopian sci-fi theme.

For the tournament, we rolled-off to choose our armies and then paired-up with other players for the first round of three games. The organizer of the tournament is way into Dust Tactics, and he hauled along his extensive collection of miniatures for players to choose from. My son chose to play as the SSU (aka Soviets) and backed his ground troops with a monstrously deadly helicopter. I chose to play as the Axis (aka Germans) with laser-armed ground troops, a huge four-legged walking gun platform and a squad of weaponized gorillas. 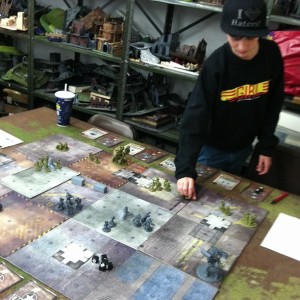 Dust Tactics plays pretty easily and fast. After the board is set and a scenario is chosen, players take turns performing two actions with each of their units. Combinations of move/fire, fire/move or deadly sustained fire are the most common actions. Range and strength of weaponry is clearly listed on each unit’s reference card. Special dice with hits on two sides and misses on the other four resolve combat, damage and saves from taking damage in cases where troops wear special armor.

Each game was timed at an hour with a maximum of eight turns per game. My son (above left) and I were easily beaten in the first round by more experienced players. What we both quickly learned was a lot of the game outcome could be pre-determined by the forces chosen by a player. Too much reliance on our heavy mechanized forces had also led to quick defeats for the both of us once they were destroyed in the first round.

In the second round, my son and I played off against each other with a bit more knowledge of the capabilities of the forces on the board. We each scored lucky shots early in the game, again knocking out each other’s heaviest armaments. After that, the game settled into a really enjoyable cat-and-mouse between buildings and barriers as our infantry, snipers and smaller mechanized walker units dueled it out to my eventual victory by a slim margin.

For the third and final round, the tournament organizer and house expert on Dust Tactics played against my son. Failing to focus early on destroying my son’s massive helicopter gunship drifting eight inches above the table, my son managed a solid win by picking off the tournament organizer’s ground units from the air with his multiple weapons. I got crushed in my final game as I faced-off against another Axis player who had stacked his forces with fast-moving zombie and gorilla units. These savage figures ran right over most of my ground units and even my artillery platform was eventually torn to pieces by the ape squad.

So, we didn’t do so well with our first go-around at Dust Tactics but we did have a good time. Dust Tactics is a fun little game that looks fantastic and plays pretty easy. The common criticism I’ve heard and experienced a bit today is that the game looks better than it plays. A detailed knowledge of all allied and opposing units is pretty necessary in fielding an effective force in the game. A few poor moves or die rolls can also pretty much end a game in an opening turn, making for some frustration I myself felt in my first game today.

There does seem to be a glimmer of future hope for a next stage of Dust Tactics. An announcement was made this month that Battlefront Miniatures will be taking over publishing and distribution of the game and the tabletop version, Dust Warfare. Battlefront’s past success with its Flames of War WWII gaming system had fans hotly debating the possible outcomes that may bring a bit more finesse to Dust Tactics over time. For now, the combination of some high-style miniatures with a somewhat less-than perfect set of rules still makes Dust Tactics more than worth a rainy day play.