In the early 1700s, Scots from clans loyal to the British ruling government had been recruited into local law keeping forces and later as more formal militia. Allowed to dress and employ traditional Highland garb and weapons, Scottish forces would serve the British military cause from the European mainland to Egypt to the Caribbean to India over the next two centuries.  Three Highlander regiments — the 42nd, 77th and 78th — would distinguish themselves in service of the Crown’s rule in the first major 18th-century conflict of British North America, the French and Indian War (1756-1763).

The 42nd (Royal Highland) Regiment of Foot set sail for North America in January of 1757 and landed in April. During their time in the colonies, these Scotsmen would participate in many key battles of the FIW, including the Battle of Carillion (1758) and the capture of Fort Ticonderoga (1759). After the war, the 42nd Foot spent time in Pennsylvania at Fort Pitt and Fort Ligonier before fighting in one of their most famed battles during Pontiac’s Rebellion at Bushy Run, Pennsylvania in August 1763.

Aside from a general collection of FIW books, I turned to a copy of Osprey Publishing’s Highlander in the French-Indian War, 1756–67 by Ian Macpherson McCulloch. The book focuses on three Highlander regiments of the period, including the 42nd Foot I’ve chosen to model. The historic background, period illustrations and contemporary plates make this a great foundation for anyone wanting to learn a bit more about the Highland regiments of the period. One plate in particular portrays detail of uniform and equipment of a typical c. 1756 private of the 42nd Foot — just the inspiration I needed as I worked on fielding my very first Highlander models.

I managed to score a half-dozen Highlanders from North Star Military Figures at half price during a recent close-out sale. Sadly, North Star is mothballing their FIW line of models for the time being as Studio Tomahawk works toward a future second edition of the popular Muskets & Tomahawks wargaming rules. I had previously painted up some of their French Canadian miniatures and I still have some of their Indians in my painting queue, so I was glad to add a few of their Highlanders to my collection while I could.

The 18th-century is fun to paint for the diversity of uniforms, weapons and mode of dress, and these Highlanders were no exceptions. This was my first go at tartan kilts, so I sunk some time into watching how-to videos online. I went with a simple technique of dark blue undercoat followed by layered grids of varying greens and greys to approximate the signature tartan of the 42nd Foot. Close-up it looks a bit pointillistic, but at arm’s length on the table I was pretty satisfied with the results. 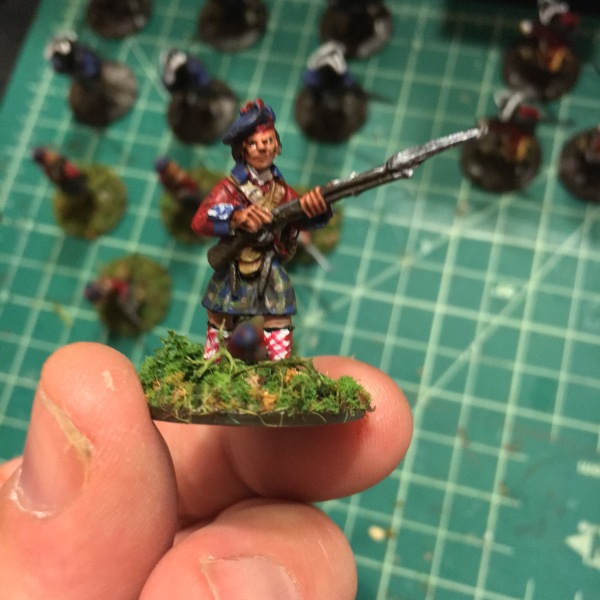 The rest of the figures were a bit more straight forward with red jackets and blue bonnets (or “tams”) with red balls on the top and red lacing at the brim. The officer also got some fancy stockings with an angled cross-hatched plaid of white and red. Having just six of the North Star Highlander models completed, I wish I had bought more before they became impossible to get. That said, I’ll be tracking down some more from other manufacturers so I can better field a large force of the 42nd Royal Highlanders.