Back in the 1970s and 80s, many popular TV shows — from Happy Days and Welcome Back Kotter to Mork and Mindy and The Six Million Dollar Man — cranked out cheap, simply-designed board games. While these games were based on shows and characters we loved, in hindsight the majority of these games were horrendous in terms of gameplay. I think there’s still a copy of the Dukes of Hazzard Game at my parents’ house, but I hesitate playing it again lest I ruin my fond childhood memories. 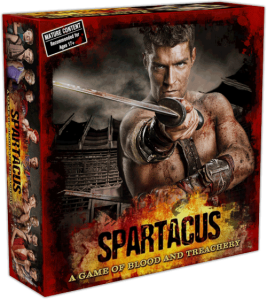 Modern shows continue to market themselves through games, although most of these come in the form of versions of Monopoly, Operation, Life, Trivial Pursuit or other established board game brands. I’ve never seen the incredibly popular Spartacus TV show on Starz, but I’ve read about the intense levels of swords-and-sandals-themed sex and violence which make the show a must-see for a certain demographic. About a week ago I had the opportunity to play the board game based on the show with three of the guys at Metropolitan Wargamers in Brooklyn, and this is definitely not a TV board game like most others.

The game is played with 3-4 players with each player representing a “Dominus” or a “house” in the ancient Roman city of Capua where the show’s drama unfolds. The quest for ultimate control through growing your “influence” is the goal of the game through three basic turn phases — Intrigue, Market and Arena.

The “Intrigue” phase allows you to play schemes and reactions via cards that grant positive or negative effect combinations on you and/or other players. The “Market” phase provides a auction-like environment where the players secretly bid for slaves, gladiators, guards and equipment.  The “Arena” phase is where two players face-off in a bloody gladiator tournament where victors bring “favor” to themselves and “influence” to their Dominus.

Spartacus is definitely a game with pretty simple some straight-foward rules, but the 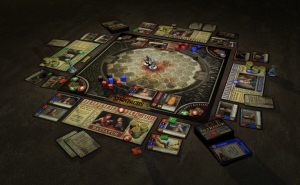 rambunctious thrill in the game is in the free-wheeling buying, selling, bribery and double-crossing among players. Your slaves maintain your house resources and often grant additional side-bonuses like the ability to heal wounded gladiators or to earn extra gold by providing, ahem, special services. Combinations of gladiators and acquired equipment makes for stronger opponents within the arena. Guards provide protection from the havock that schemes can rain on your house. All along, players are trading and buying their way through the game. You might bribe a player to allow your gladiator access to the arena for a chance to score victory over a weaker player’s gladiator. Other times, you might share the rewards from a scheme with another player in exchange for  use of that’s player’s influence strength to your benefit.

I played the game with three other players which made for a great dynamic of shifting alliances. One player quickly acquired Spartacus and a full compliment battle equipment making him unstoppable in the arena, so the rest of us cut whatever side deals we could to block going up against him in hand-to-hand combat. While we were busy keeping Spartacus out of the arena, another player quietly bought, sold and traded his way into a series scehemes and slave acquisitions in the market which eventually shot him to the lead and winning with the most influence in the game.

Spartacus plays in a couple hours and has a great design with characters pulled directly from the TV show. Themes and play can be a bit raunchy and graphic at times, and while it’s not designed as a role-playing game, players may naturally gravitate toward taking on the snarling personalities of their Domini. Fan of the show or not, strap on your shield, grab your trident and head to the arena for some wild fun in ancient Rome.