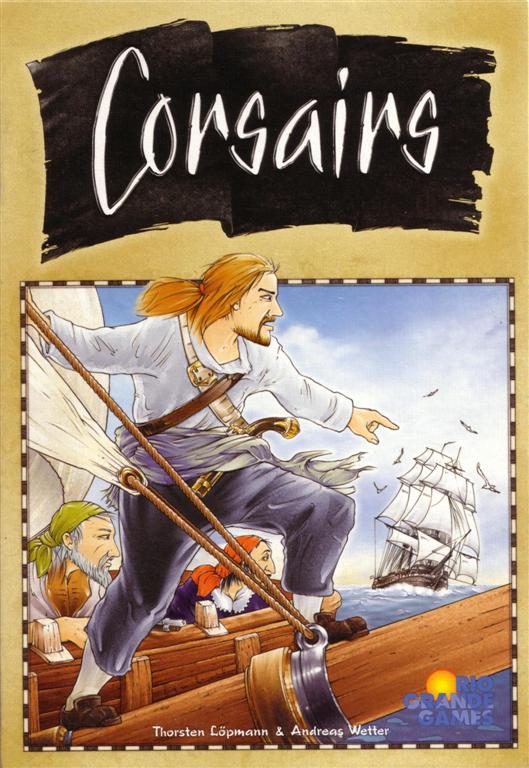 I’ve spent the last month or so reading Robert Louis Stevenson’s Treasure Island with my younger son, and it still amazes me how pirate stories continue to engage people long after the romantic swashbuckling days of yore have faded into history and myth. Just this past year, the rollicking fun NBC show Crossbones starring John Malkovich set sail in primetime. Even though the show was cancelled after a short run, it’s amazing the retelling of the exploits of the famed pirate Blackbeard found a home once again in a 21st-century crowded with zombies, superheroes and retro advertising executives behaving badly.

The pirate theme, as I’ve noted before, also continues to have a tight grasp on gamers. This past weekend at Metropolitan Wargamers in Brooklyn, NY, I had a chance to play through the now out-of-print Corsairs produced by Rio Grande Games in 2000. Playing best with four players, Corsairs involves the simple idea of raiding and capturing ships by playing provision and pirate cards, rolling dice and double-crossing opponents. Four heavy cardboard ships (or galleys) begin on the table. Each galley card depicts the point value at the top, the die value needed to capture the ship and a mix of required provisions needed before an attempt can be made to capture the vessel.

Players begin by being dealt a hand of six cards each. The color-coded cards depict provisions – bananas, beans, bread, meat, rum, or water – or a pirate with a face value of  2 to 4. In turn, players place a total of two cards on the available ships. Matching types and amounts of provisions are played on ships face up along with any pirate cards face-down. After two cards are played, a third is discarded before redrawing back to a six-card hand. Play passes in turn until a player has enough required provisions to attack a ship. Rolling two dice and adding available pirate bonuses, players attempt to exceed the required value to seize the ship. If successful, all players lose the provisions on that ship and the player takes the card. If unsuccessful, the player loses their provisions on the ship and play passes to the next player. A player who attacks on their turn misses their next turn when they can redraw their hand. Once the final galley card is played and seized, the game ends and the player with the most points wins.

A game of Corsairs at Metropolitan Wargamers

As with any good pirate game, the opportunity to out-scalawag your opponents is where the real fun comes in with Corsairs. With cards played on a ship, a player may attempt a “broadside” attack once per turn by rolling two special dice with provision colors on each face. A successful result enables the player to steal the provisions for their own use or simply to prevent another player from using them first. Capturing several ships of the same colored border also allows a player to double-up on points, so stealing a ship away from another player before they snatch it also comes into play.

I managed to win my first play through Corsairs by doubling-up on two high point purple ships, snagging two other valuable galleys and then foiling some other players by stealing their provisions through broadside attacks. Corsairs moves fast like a ship on the high seas and requires no reading, making it a great game to play with kids. And what kid – young or old – doesn’t like pirates?

Collector’s Note: You made need a treasure map to find a copy of the out-of-print Corsairs, but you can fdig them up on eBay occasionally for upwards of $50-60.