This past Sunday a fellow member of Metropolitan Wargamers and I climbed aboard a trolley tour at historic Green-Wood Cemetery. The occasion was the cemetery’s annual Battle of Brooklyn Commemoration, fortuitously held this year on the exact date — 241 years later — of the battle on August 27, 1776. 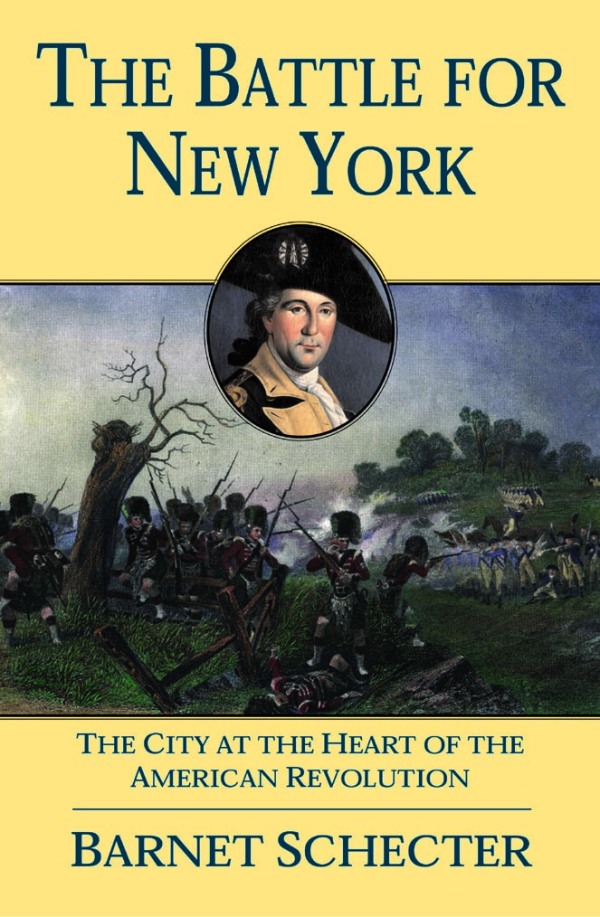 Leading the two-hour tour were the cemetery’s resident historian, Jeff Richman, and Barnet Schecter, historian and author of The Battle for New York. Schecter’s book is the long-held standard text on the battle, variously known as the Battle of Long Island or the Battle of Brooklyn. I’ve had a copy of his book for years and I’ve heard him lecture previously, but the tour offered a great chance to get up close with both Schecter and Richman as they spun a narrative of the battle’s events more than two centuries previous.

One of the first stops on the tour was along a ridge affording an southeast-facing view from the cemetery out into Long Island. From this position, the historians presented with some certainty,  General George Washington and his staff were able to make their first accounting of the landing of General William Howe’s British forces at Gravesend Bay August 22nd-24th. The prospect sits atop a terminal moraine known as the Heights of Guan, the furthest point of a glacier’s advance millennia ago, and opens into a wide view across the flatlands of Brooklyn where only farms, fields and open ground stood between British and Continental forces. On the beautiful, clear morning of the tour, our view stretched to the horizon, making it easy to imagine how important the high ground had been in an era when first-hand observation was often the only information a commander had to go on in the field. From this view, Washington’s observations came to the (incorrect) conclusion the bulk of the British force would march here to his west flank and attack. The British command had other plans.

The mausoleum of Robert Troup, lieutenant colonel of the Continental Army

Green-Wood being the final resting place of many prominent New Yorkers of the past couple hundred years, there were several stops along the tour at notable graves. One example was at the mausoleum of Robert Troup. A college roommate of Alexander Hamilton and junior officer in the Continental Army at the time of the battle, Troup was one of just five men sent to stand watch at the far east flank of Washington’s position at the Jamaica Pass on the eve of the battle. Unfortunately for the Colonials, the British secretly divided their force on the evening of August 26th and silently marched some 10,000 men, 40 guns and a long baggage train through the darkness to Jamaica Pass. In this audacious flanking maneuver, the British would capture Troup and his comrades and begin closing on an unsuspecting Washington from the east. 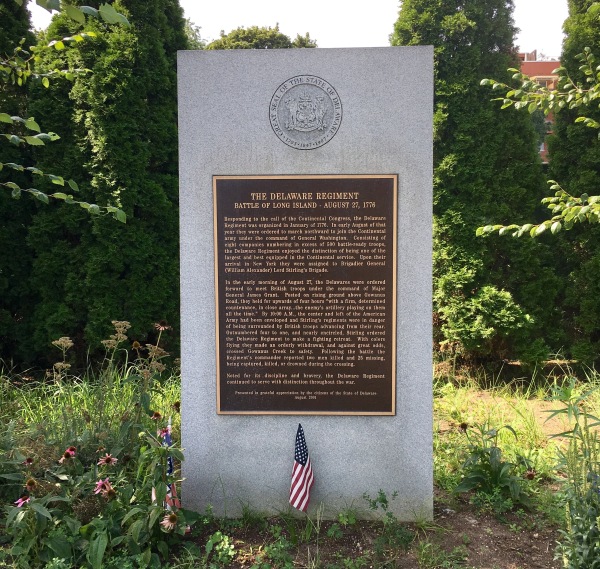 Washington had thrown the bulk of his force on the west flank, led by William Alexander (aka “Lord Stirling”). Just as the British were moving in from the east, a British decoy force led by James Grant had made its way toward Stirling’s lines. Our tour traced Grant’s advance and made our next stop near the approximate site of the first clash of Stirling and Grant late on August 26th. The skirmish, now remembered in a typical mixture of fact and folklore, was recounted as being fought through near a watermelon patch at the now-vanished Red Lion Inn. This far edge of the cemetery property now houses a parking lot and maintenance sheds, so it really takes a stretch of the imagination to transport oneself to those opening shots of the battle. The one nod to the historic events there is in a relatively recent monument to the the Delaware Regiment which would play a part near this spot the following day as the Battle of Brooklyn commenced.

Our guides for the morning, Jeff Richman (left) and Barnet Schecter (right)

It was here, Richman and Schecter both pointed out, that American troops for the first time in the war formed European-styled firing lines and exchanged volleys with British soldiers, then the most powerful military force in the world. Our tour then followed the action of the Colonial’s right flank as Stirling’s men -including the Delaware regiment and Pennsylvanians — repositioned at an angled rise, firing into Grant’s advancing troops. It was there that two distant cannon blasts, far to east, signaled the surprise advance of the main British lines that had snuck through the Jamaica Pass overnight. In one echoing report, the British had announced themselves and the Americans found themselves enveloped by a force more than twice its size.

The statue of Minerva, placed atop Battle Hill by Charles Higgins in 1920

Following the retreat of Stirling’s troops, we made our way to our final tour stop at what became known as Battle Hill in the 20th-century. Standing before the statue of the goddess Minerva, Richman recounted the story of the monument’s placement by Charles Higgins, an Irish immigrant who made his fortune in India ink. Archival research unveiled Higgins’s original intent to have the statue face the Woolworth Building although we can be thankful today for its dramatic placement facing of the Statue of Liberty across the harbor.

And it was on the hill 241 years ago this past weekend where a couple hundred Americans seized the 200-foot hill and held off 2000 British troops over several attacks. Out of ammunition, the Colonials eventually surrendered but they allowed for the majority of Stirling’s men to slip toward the Gowanus Creek. There, outgunned and outnumbered, the Americans (led by the 1st Maryland Regiment) made head-on attacks British dug in at the Vechte–Cortelyou House, known today as the Old Stone House. Once again, the sacrifices and delaying actions of Stirling’s force against the British allowed the vast majority of the Americans to flee toward the East River. Two evenings later, on August 29, 1776, Washington led a nighttime evacuation to Manhattan. Not only had the young Continental Army and most of its leadership been saved, but most probably the Revolution was saved, too.

I’ve lived in Brooklyn for more than twenty years and I’m an avid history fan, but sharing a morning with two passionate guides walking historic ground really brought long-ago events alive anew. New York and Brooklyn are not places that evoke the Revolution for most Americans. Boston, Lexington-Concord, Bunker Hill, Saratoga and Yorktown — those are sites of the War of Independence we all learn as children, not Brooklyn. But both Richman and Schecter hit on the importance of the Battle of Brooklyn over and over again on the tour — the first battle after the Declaration of Independence as Americans; the largest battle of the American Revolution; the first time Americans faced British in traditional open field battle; and, the event where Washington managed to snatch a victory (of sorts) out of a defeat. The war continued another seven years, but had the events in Brooklyn gone differently it may very well have ended less than two months after tAmericans had taken the radical first steps toward independence. One thing we Brooklynites are good at is promoting our local brand, but when it comes to the Battle of Brooklyn, it most certainly warrants repeated commemoration every August.