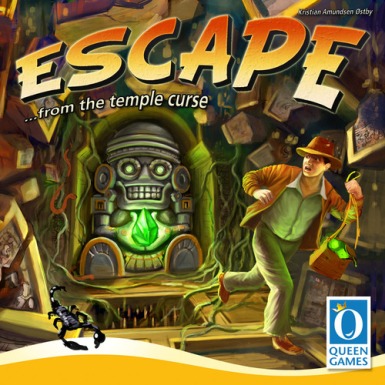 As I’ve previosuly written, I grew up on Indiana Jones and the cliffhanger world adventurer genre in re-runs of old movie serials. Games like Fortune and Glory are loads of fun in taking on the guise of a rustic hero globetrotting to exotic locales in search of treasure and reknown while dodging enemies looking for to dastardly foil your mission. A few weeks ago at Metropolitan Wargamers I had a chance to run through a few games of another adventurer game, Escape…From The Temple Curse from Germany’s Queen Games. Released in 2012 after a successful Kickstarter campaign, Escape is a fast-paced game in which you and your fellow player-adventurers race through a temple collecting treasures and escaping before the temple collapses.

Escape begins with each player placing their adventurer on the starting temple tile. Simultaneously, players begin furiously rolling five dice apiece. Rolling a green adventurer allows a move while a blue key or red torch reveals a new room, opens a treasure or allows for a gem to be picked up. A black mask “curses” a die which is set aside and cannot be used in a subsequent roll. Once a gold mask is rolled, up to two cursed black mask dice can be put back into play. Players may share dice results if they occupy the same chamber, adding a collaborative element to the game. Quick-paced decisions need to be made constantly as players need to stay close enough together to help each other but also spread out to cover enough ground to gather gems to unlock the exit to the temple.

Unlike most games I play over many hours, Escape plays out in no more than 10 minutes of real time. The game uses an actual recorded soundtrack which builds in intensity over the course of the game until a warning sounds and the temple crashes to ruins. Not only does the soundtrack serve as a game timer, but it also adds a real cinematic aspect to the game. It’s as if you’re playing through an old Saturday matinee movie serial.

Playing the game is crazy, even more so as the number of players increases. From the moment the soundtrack begins, people are rolling dice, shouting to each other, mapping new routes, running into roadblocks, collecting gemstones, falling victim to a curse or finding a treasure. Two expansions make offer additional temple tiles as well as curse and treasure markers. Curses might make a player lose a die if it rolls off  the table or force them to not speak. Treasures do such things as reveal magic doors between chambers or transport you magically to another part of the temple.

The game plays so fast that any decent gaming session allows for multiple games to be played with increasing difficulty by adding in more of the expansion elements. In the few games I played with the maximum of five players at Metropolitan Wargamers, we successfully escaped the temple at around the 8-to-9-minute mark each time. Although our bunch at the club was compromised of experienced gamers in our 20s-40s, Escape is simple enough in its rules that families would find the game to be a kick. Regardless of the make up of the players, Escape…From The Temple Curse is loads of fun for anyone looking to live out their cinematic adventure fantasies in a manic and fun-filled tabletop game. 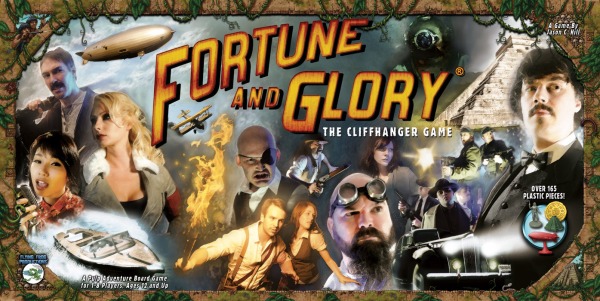 By the time Raiders of the Lost Ark hit the theaters in the summer of 1981, my newly-teenaged brain was already well-steeped in the concept of high-adventure cliffhanger movies and serials. For most kids, Indiana Jones kicked-off a mini-rival in interest in the danger-thwarting, jungle-hacking, mystery-unraveling and treasure-seeking characters that populated decades of Saturday afternoons in local movie theaters for my parent’s generation and earlier. The elements of cliffhangers are so ingrained in our pop culture to this day that I challenge you to find a popular TV show, action movie, comic book or video game that doesn’t borrow some element from the genre.

One of the best things about the gaming hobby is that you can pretty much be guaranteed there’s a a game (or several) that aligns with a just about any thematic interest. So, this past weekend at Metropolitan Wargamers I had a chance to try out taking on the role of an international adventurer with 2011’s Fortune and Glory from Flying Frog Games.

The game takes place in the between-the-wars period of the 1930s where mobsters and Nazis vie for international control while your adventuring character roams the world searching for fantastic objects of great value and power. Players take on one of eight fantastically-named personalities such as Li Mie Chen, The Duke, Jake Zane, Sharon Hunter, Dr. Zhukov, Shelley Hargrove, Jacques Moreau and Cartwright (all pictured below, left to right and top to bottom). Each player character comes with their own set of special abilities and attributes such as Cunning, Lore, Combat and Agility. These attribute strengths come into play as characters roll dice to resolve their success during certain encounters within the game adventures.

The game begins by placing artifacts in random locations around the globe. Players move their characters toward these objects and upon encountering them, roll dice in a three-part attempt to resolve their quest. The thing that makes Fortune and Glory so entertaining is the random mechanic of drawing cards to create objects of the quests and the adventures themselves. 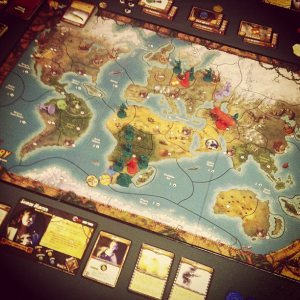 For instance, in our game (pictured at right) a quest for a magical sword unveiled an adventure that involved solving a mysterious puzzle, a high speed car chase and a final airplane chase. Failing to roll successfully against the high speed car chase challenge wound up in a “cliffhanger” on the reverse of the card which led to the car going over a cliff. All this detail is related on the well-illustrated adventure cards and left to the players to dramatically read aloud, often to great mirth around the board. Other encounters during our game included a shootout in a nightclub, a case of malria in the jungles of the Amazon and an unsuccessful encounter with a Yeti in the northern steppes of Russia. With hundreds of cards available in the game, there is endless variety to the how each adventure will play out. All this contributes significantly to the high replay value of Fortune and Glory.

Aside from all the cards, there are over 150 miniatures included for character adventurers, Nazis, mobsters, temples and a zepplin which randomly drops new Nazi henchman around the board as the game progresses. Plastic gold coins mark your progress toward gaining “fortune” and may be spent to further outfit your adventurer with guns, maps and even an airplane. In the end, collecting blue plastic “glory” coins points the way toward victory for our heroes or the villains.

We played the game collaboratively, allowing us to work together with each of our own abilities contributing toward our march toward glory and victory. A competitive set of rules options is also included which completely changes the dynamic to duelling adventurers questing toward individual glory.

Fortune and Glory carries a hefty retail price of about $100 but can be found for around $75 online. However, the investment in this big, heavy box is well worth it with the gorgeous design and endless randomness to the game providing a hugely entertaining world of cliffhanging adventure. Fortune and Glory is certain to keep you on the edge of your seat and may  even cause you to spill your popcorn if you’re not careful.