By the early 1980s, I had a shelf full of games from Parker Brothers. Like millions of other kids, I was brought up on Parker Brothers classics like Monopoly, Clue, Risk and Sorry! Most of these games were already a couple generations old by the time I first played them, and, despite their updates, they were showing their age a bit. But then in 1982 Parker Brothers introduced Survive! which has gone on to be a new modern classic for gamers of all ages.

The story of the game involved each player trying to get their tribespeople off an island which is quickly sinking into the sea. At the beginning of the game, the hex land tiles – beach, forest and mountains – were shuffled and then placed randomly on the board to create the island. Then, in turn, each player placed their ten tribespeople tokens with up to three per hex except for beach spaces which held only one. Each player piece had a number value etched into the bottom, and saving the higher-valued tribespeople was key to scoring and winning the game. Cardboard lifeboats were then placed floating at the edges of the island and a sea monster figure went in the lagoon at the center of the island. 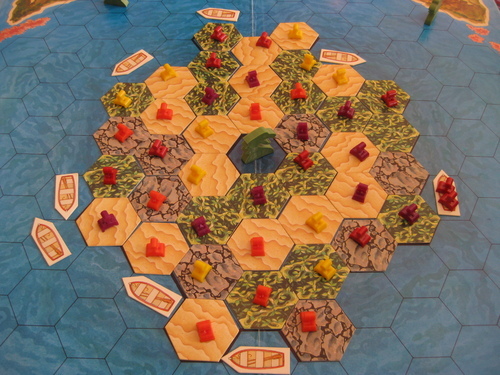 Each turn, players moved their tribespeople and then removed a tile, beginning with beach hexes and then forests and mountains. Player’s pieces which fell into the water drowned, but you could also move your a piece to a water space as a swimming would-be survivor. Boats carried up to three survivors at once and could carry tokens from multiple tribes at once. Removed tiles had special events on the back and might indicate the appearance of a whale, dolphin or shark in that hex. Finally, a die was rolled to move a sea creature dipicted on the special die.

Strategy for the game involved getting as many of your tribespeople to the coral islands at the corners of the board before a mountain hex piece was turned over to reveal a volcanic eruption killing all survivors not safely away. Moving a whale to a space with a boat capsized the boat, tossing any passengers into the water. A dophin could carry one tribesperson swiftly through the water. Sharks ate swimming survivors and the sea monster destroyed a boat and all its passengers. Other tiles revelaed different special actions, including whirlpools which destroyed anything in that and immediately adjoining spaces. The combination of all the possible outcomes and actions of the other players made for a mix of competitive and collaborative play, always balancing what was best for your tribespeople against what the other player’s actions were.

At the time, there were a number of things that set Survive! apart from most other conventional board games. The board featured hex-shaped spaces like many of the fantasy and RPG games I was playing then. The board was also different each time you played, adding a randomness factor not found in most board games featuring a traditional static set up every time you played. The game components were a bit less abstract and more like the “meeples” now a common part of just about any Eurogame.

A European version of the game appeared a few years after the original with a few variations. In 2010, Survive: Escape from Atlantis! was released by Stronghold Games with an updated game using elements of both versions in one. Since then, Strongehold Games has also released a number of expansions including a 5-6 player variant and others containing extra sea creatures. The game remains widely available, and the 30th anniversary base game released in 2012 can now be picked up for $40 with expansions running for $10 (all cheaper online).

More than three decades on, Survive: Escape From Atlantis! has entered the modern canon of board games. Whether your tribe includes kids or a group of friends looking to pick-up a quick new game, heading back to the island of Survive! is well worth the ride.

Collector’s Note: While Survive: Escape From Atlantis is now widely available, original copies of the 1982 first edition of Survive! can be found on eBay for $25-50. Individual game components are also available for a few bucks apiece, just in case any of yours were swallowed-up by a sea monster over the years.

By 1980 I was like a lot of kids with feet in two worlds of gaming — Dungeons & Dragons and electronic games. Both were well on their way to being the worldwide phenomena they would become in the next decade, and Mattel and TSR (then owner of D&D) sought to cash in on the intersecting interest of adolescents everywhere.

I never owned a copy of Mattel’s Dungeons & Dragons Computer Labryinth Game, but plenty of my friends did. The game looked pretty cool with its 64-square grid of spaces surround by a plastic castle-like wall. Metal figures represented a dragon, two adventurers and a treasure chest. The game could be played solo or with two players. A player moved their piece around the board, placing plastic walls when the board revealed a wall with light-up indicators. Other indicators would light up as you encountered monsters, traps or the dreaded dragon which roared as you approached. A player who avoided the dragon and navigated the revealed maze to the treasure first won the game.

A year before the D&D Computer Labryinth Game was released, Mattel was already competing in the new video game market with its Intellivision system. Those early years of the electronic game market were full of games which promised more than they delivered. Using the word “computer” in this game’s name was no doubt the work of shrewd marketing as the game itself was pretty low tech. Attaching the D&D graphics and brand to the game and even a moody TV ad didn’t do much to cover up for its shortcomings. Looking back, I recall the game even then to be unsatisfying to occasionally frustrating with its randomized LED grid and pieces which never really seemed to fit right. Retailing at around $45, the game didn’t come cheap either.

In 1984, Mattel admitted to its failed also-ran place in the video game market and pulled the plug on its Intellivision system. While it would go on to continued success with its boy-focused toy brands like Hot Wheels, Matchbox and Masters of the Universe, Mattel would never again be  significant player in electronic games. D&D, on the other hand, continues to thrive to this day. While the brand extension foray of the D&D Computer Labryinth Game never really delivered on the promises illustrated in Mattel’s box art, the game does capture a moment in time when gaming was bridging the gap from one era to the next.

Collector’s Note: Complete copies and components of the Dungeons & Dragons Computer Labryinth Game are readily avilable on eBay. Games in the original box run in the $30-50 range while the metal miniatures generally go for $5-10 each.