Memorial Day in Brooklyn saw a crowd of the guys gaming and grilling at Metropolitan Wargamers, but I chose to spend the sunny day with my youngest son retracing the historic military past in my own backyard.

I live about a 15-minute walk from Green-Wood Cemetery, a National Historic Landmark celebrating its 175th anniversary this year. The cemetery occupies a 478 acre hilly, picturesque landscape traced with winding roads and paths. It is a who’s who of New York City and American history, and the design of its entry gates, grave markers and mausoleums provides a visual history of how Americans have celebrated themselves in the afterlife across three centuries.

What we celebrate today as Memorial Day began as Decoration Day when freed slaves decorated the graves of Union dead following the American Civil War. Green-Wood’s marking of the war is found with 1869’s Civil War Soldiers’ Monument (photos below). The pillared monument ringed with four bronze statues was restored and re-dedicated in 2002. The re-dedication kicked off interest in documenting and marking the Civil War dead interred at Green-Wood, and to-date the Civil War Project has identified some 3,300 residing for eternity in the cemetery. 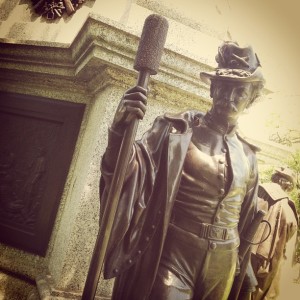 The Civil War Soldiers’ Monument sits along Battle Avenue and atop Battle Hill, the highest point in Brooklyn. The hill won its name for its important strategic role in 1776’s Battle of Long Island as Colonial 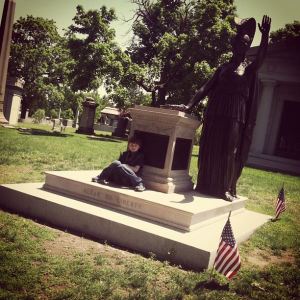 forces held off multiple attacks on the far left of the invading British line. Standing on the hill today, you can clearly see the military importance of the hill with its broad views of the sloping land down to New York Harbor to the west and the island of Manhattan to the north. The battle is marked with the Altar of Liberty (photo at right), a 1920 monument installed as part of the plot of Brooklyn India ink magnate Charles Higgins. The bronze statue of Minerva raises her arm to the Statue of Liberty standing in the distant harbor, making the view from Battle Hill on a clear, sunny day one of the most breathtaking vistas in the city.

Next, we wound our way toward the center of the cemetery and to the family plot of Abram Duryée (photos of Duryee and his monument below). I’m a fan of Duryee and his command of the 5th NY Volunteer Infantry during the Civil War. Known as “Duryee’s Zouaves,” these Manhattan men saw action throughout the war at such battles as Second Bull Run, Antietam, Chancellorsville and Fredericksburg. I’ve made the 5th NY with their baggy red chasseur trousers, dark blue jackets with red braiding and fezzes with yellow tassels a big part of my 28mm American Civil War painting project this past year, so it was great to stop and pay tribute to him at his final resting place. 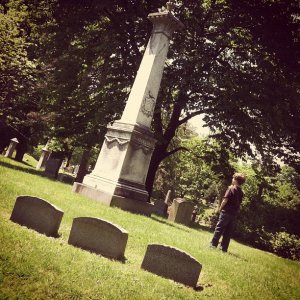 Our final destination of the afternoon was to the grave of General Henry Wager Halleck, a relative of mine (photos of Halleck and his monument below). Halleck served as General-In-Chief of Union forces for about two years of the Civil War before being replaced by the much more famous General Ulysses S. Grant. Known more for his intellect than his military exploits, Halleck was nicknamed “Old Brains” during the war and spent his years after the war as a lawyer and author. While by no means a household name, I was glad to have the opportunity to visit his grave again after many years. 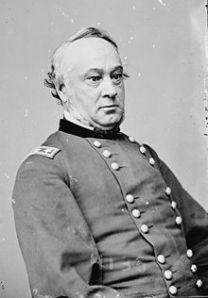 As a wargamer, my hobby wouldn’t exist without wars and the men and women who fight and die in them to this day. On this Memorial Day, it was a good change of pace to put down my dice, step away from the tabletop and venture out for a few hours visiting the monuments to those who have paid the ultimate price throughout American history.

Any American school kid with a passing knowledge of the American Civil War will be able to immediately recognize the classic blue uniform of Northern forces and the less regular gray and earth-toned make-up of Southern troops. What’s lesser-known is the fanciful variety that was found in uniforms of some units during the war.

Immediately preceding the American Civil War, Europe’s Crimean War of the 1850s saw the Russian Empire facing off against an alliance of the French, British and Ottomans. The French Zoauve uniform of the Crimean War went on to inspire military uniforms in the United States, and one of the more notable Zouave regiments of the Civil War period was the 5th New York Volunteers or Duryee’s Zouaves.

Formed in New York City in 1861 by Colonel Abram Duryée, the 5th NY Volunteers would find action throughout the war at Second Bull Run, Antietam, Chancellorsville and Fredericksburg. But it’s the uniforms that make the 5th NY a memorable unit for me. Dressed in baggy red chasseur trousers, dark blue jackets with red braiding and topped in fezzes with yellow tassels, Duryee’s Zouaves offer up one of the more colorful units to deploy on a Civil War gaming table. While some period drawings and photos exist in black and white, the true whimsy of these uniforms can really only be found in the work of modern artists like Don Troiani  (see above) or with active 5th NY Volunteer re-enactor groups.

For miniatures, I love the affordable and well-sculpted variety to be found in the line of 28mm American Civil War models from Perry Brothers. My 5th NY Volunteers are a mix of a Perry Brothers plastic Zouave box set and two sets of their metal Zouave firing/skirmishing line. Perry Brothers offer a nice variety in optional poses and heads in their plastics, and the metal figures offer just a bit more crisp detail. I chose to model most of my Zouaves in their fezzes, as this is how they usually appeared in battle. For variety’s sake, I modeled one unit with turbans which were more common in ceremonial and parade settings. The box set also offers arm options to represent units advancing at “right shoulder shift” and “at the charge” with bayonets leveled at the enemy lines.

Below is an overview of my completed five squads from the 5th NY Volunteers along with their company command stand.

And here’s a close-up of the company command below. 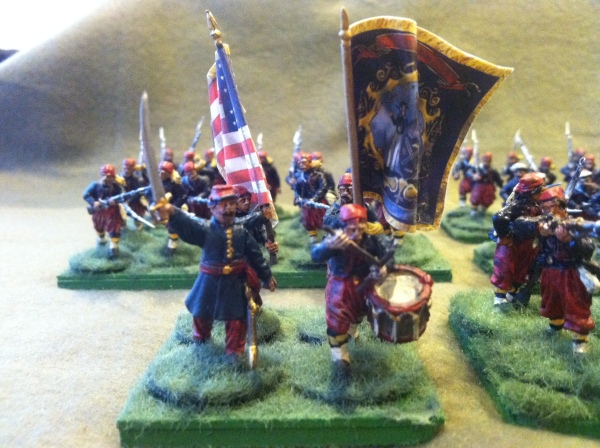 I painted most of the company in their more common battlefield fez headgear, shown below in detail. These figures are the metal Perry Miniatures firing line, while the rest of the company are plastics. 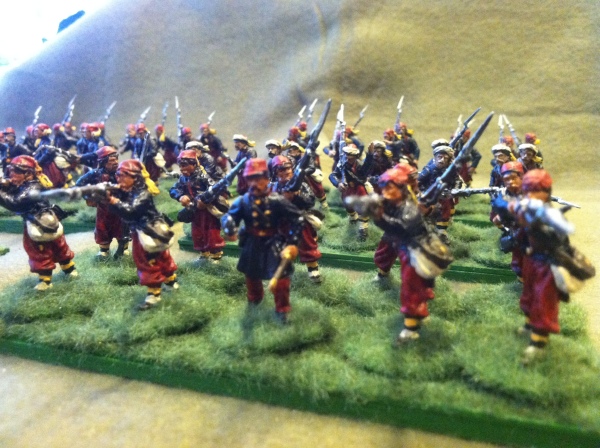 And finally, here’s the one squad in their turbans. 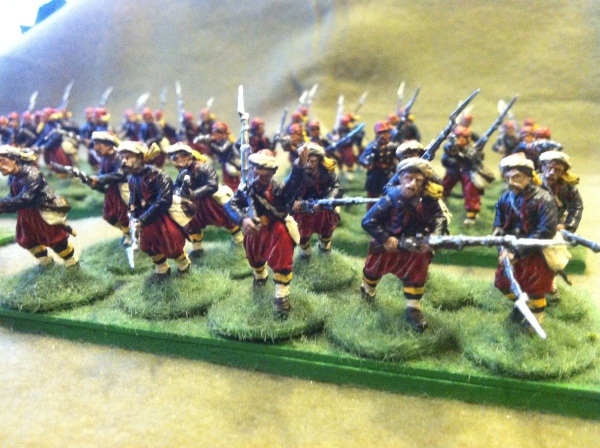 Painting Duryée’s Zoauves was a great break from my usual painting, and now I’m already thinking of some other specific units from the Civil War to mix up the walls of blue and gray lining my tabletop battlefield.