Like so many of my generation, J.R.R. Tolkien’s stories from the page to the screen to the game table and back again have shaped much of my life. As a fantasy-steeped child of the 1970s standing on the threshold of a lifetime of gaming and Tolkien fandom, The Hobbit (1977) and The Lord of the Rings (1978) cartoons were my first intros to the mythos of Middle-Earth. From there, I began my own journey of swords, sorcery and funny-shaped dice with Dungeons & Dragons. In my teen and college years, I plowed through Tolkien’s The Lord Of The Rings and The Hobbit books. After traveling through many pages and countless paper and pencil campaigns, Peter Jackson’s trilogy of The Fellowship of the Ring (2001), The Two Towers (2002) and The Return of the King (2003) turned another whole generation (including my own young kids) on to the story that became a worldwide phenomenon anew. Around the same time, I leaped into Game Workshop’s Lord of the Rings miniatures game and spent a fair amount of time re-fighting the battles of Middle-Earth on the tabletop in miniature. Ten more years on, Jackson returned to the prequel story of The Hobbit with An Unexpected Journey (2012), The Desolation of Smaug (2013) and The Battle of the Five Armies (2014). So, not coincidentally, gaming in the realm of hobbits, orcs, wizards and elves has also returned for a time.

Over four decades, I’ve come around again and again to the Battle of the Five Armies in the late-70s cartoon, my worn copy of The Hobbit, Jackson’s final blockbuster movie of last year and now with the 2014 re-issue of The Battle Of The Five Armies board game by Ares Games. The epic battle between the loose alliance of the Free Peoples of men, dwarves and elves and the evil Shadow Armies of orcs and goblins at the foot of the Lonely Mountain is a story etched into my imagination and that of many of my friends since an early age. This past week I sat down at the table with a fellow member of Metropolitan Wargamers in Brooklyn, NY for a learning game and to meet as the forces of good and evil for control of Middle-Earth.

The Battle of the Five Armies begins

The two-player Battle Of The Five Armies retails for $89.99 USD but can be found online for about $60 USD, an incredible deal for a big box packed with fantastic components. The game contains 125 well-sculpted plastic miniatures depicting dwarves, men, elves and eagles of the Free Peoples in blue and goblins, orcs, warg riders and bats from the Shadow Armies in a ghastly red. Nine hero characters from the battle — Bard, Beorn, Bolg, Bilbo Baggins, Dain, Gandalf, the Elven King, Lord of the Eagles and Thorin — are each represented with an unique silver miniature and a character card outlining their special heroic abilities. Action and combat dice, numerous cardboard counters, dozens of Event, Fate and Story cards and a simple game board presenting the plains and mountains of the battlefield round out a greatly designed game.

The game begins on the eve of the battle with the Shadow Armies swarming in the mountains while the allied elves, men and dwarves work to create defensive position from the impending onslaught. Turns progress along a Fate track with the forces of evil racing to capture territory equaling ten points before time elapses or the Free Peoples are able to repel the Shadow Armies attack with the arrival of reinforcements or surprise allies like the Eagles from Misty Mountains or the ferocious shape-shifting man-bear Beorn.

The Shadow Armies and Free Peoples fight at the Eastern Spur 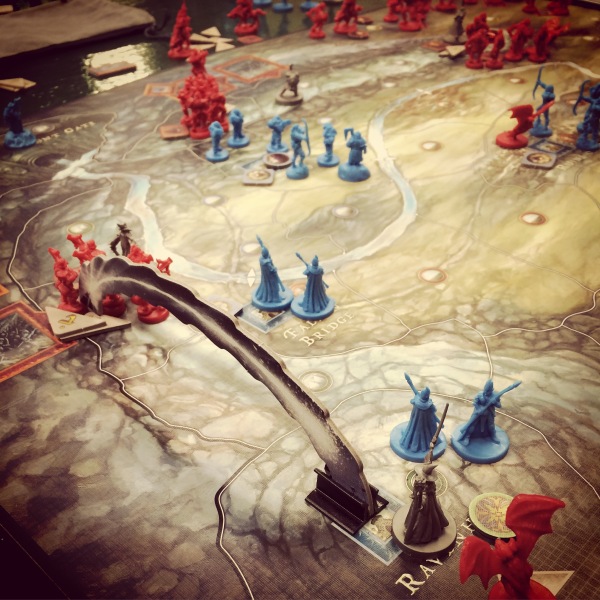 Dice and cards propel the action of the game. Each player throws a set of special Action dice, each depicting a specific type of activation within their turn — Character, Army, Muster, Muster/Army, Event and Will Of The West for the Free Peoples or Lidless Eye for the Shadow Armies. Beginning with the Free Peoples player, each chooses an Action die and resolves a given action. For example, an Army action allows a player to move or attack with armies or play a Character Event or Story card, and a Muster action allows recruitment or rally of armies or the play of a Muster Event or Story card. When a combat occurs, players collect their available unit cards into their hand and then roll dice based on the Combat ratings of their units. Along the way, other cards may be played to create specific events like dealing extra damage or negating leadership abilities. Terrain also plays a role in specific unit effectiveness during battle. 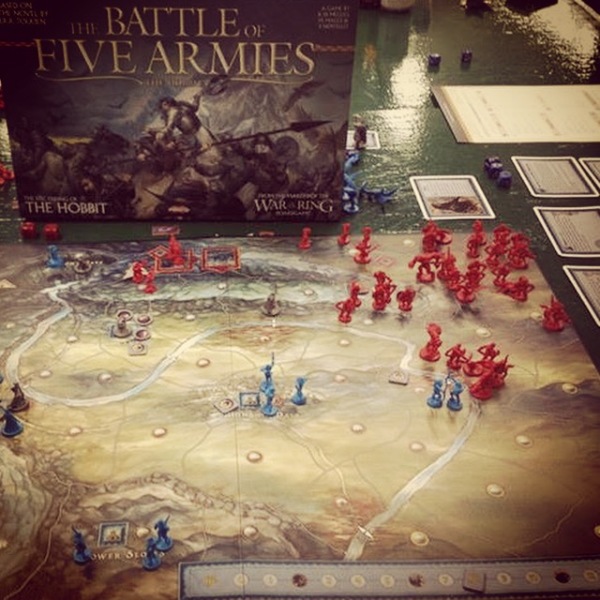 Like many strategy games, The Battle Of The Five Armies becomes one of timing and getting the right cards, actions and forces in play. In our first learning game, the Shadow Armies quickly built up their horde and raged forward with fierce waves from the north and northeast. A heroic defense of the Eastern Spur by Lakemen fell to the orcs and their wargrider allies, and many dwarves also met their final end in a battle at Camp near the Front Gate. Gandalf held off the orcs and goblins to the west with a ranged fireball hurled from Ravenhill, saving the elven forces at the Fallen Bridge from imminent attack. As the Fate track moved in the late game to the eighth position, the Eagles were able to swoop down from their mountain aerie and attack the Shadow Armies in four areas, stalling the advance of evil. The Shadow Armies regrouped as additional recruits were placed throughout the realms defended by the Free Peoples. The Fate marker moved into the eleventh stage, releasing Beorn who sat at the southern border ready to wreak havoc on the encroaching Shadow Armies. Although many Free Peoples had fallen during the battle, the Shadow Armies weren’t close enough to strike a final fatal blow, and Middle-Earth remained free at the close of the game.

Our first game of The Battle Of The Five Armies, epic as it was, clocked in at over three hours as we got a hang of the rules. Lessons learned included the need for the Shadow Armies to always be on the attack since the arrival of more allies of the Free Peoples spells almost certain defeat for the forces of evil. Studying over the various cards and their effects, used by themselves or in combination, is also a big part of becoming an effective commander on either side of the battle.

Famously, Tolkien’s description of the Battle of the Five Armies in The Hobbit spans less than ten pages tucked in near the end of the book. For the two of us players, what we felt most from the game was how true it was to that short text and the pictures and the legends filling our imaginations over many, many years.