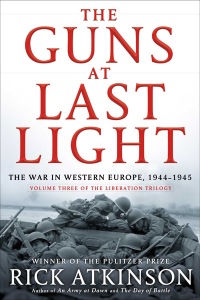 In the opening pages of the recently-released and well-reviewed final book of his World War II “Liberation Trilogy,” The Guns At Last Light: The War In Western Europe, 1944-1945, author Rick Atkinson takes the reader swiftly to St. Paul’s School in west London on the fateful morning of May 15, 1944. In a darkened room, the secret council of the Supreme Headquarters Allied Expeditionary Force (SHAEF) were awaiting a presentation on the final plans for the impending Normandy invasion. With the 145 collected commanders and dignitaries (including Prime Minister Winston Churchill and King George IV) seated, the meeting is brought to order by Supreme Allied Commander, US General Dwight D. Eisenhower:

Behind him in the cockpit of the Model Room lay an immense plaster relief map of the Normandy coast where the river Seine spilled into the Atlantic. Thirty feet wide and set on a tilted platform visible from the back benches, this apparition depicted, in bright colors and on a scale of six inches to the mile, the rivers, villages, beaches, and uplands of what would become the world’s most famous battlefield. A brigadier wearing skid-proof socks and armed with a pointer stood at port arms, ready to indicate locales soon to achieve household notoriety: Cherbourg, St.-Lo, Caen, Omaha Beach.

Over the next several hundred pages, Atkinson’s book goes onto to recount the trials, travails and eventual success of Operation Overlord and the eventual Allied victory in Europe. Although I’ve read accounts of the period before, the book is incredibly gripping and moves surprisingly briskly. In reading though, my mind keeps wandering back to that brief description of that enormous model of the invasion laid out before so many great military leaders nearly 70 years ago.

No one knows for certain when terrain models were first used in warfare. One might easily envision some leader of a primitive warband arranging sticks in the dirt before his subordinates as a way of planning for an upcoming attack on a rival force. What we do know is that by a few hundred years ago models were being used frequently by commanders and in military schools throughout Europe. It was out of these same elite war colleges that modern miniature wargaming would eventually spring.

It’s from this place where my mind keeps turning back to that plaster model in 1944 London. As a wargamer, I’ve previously written here about my passion for creating a well-laid-out terrain board for my gaming. With a bit of digging around online, I managed to uncover quite a few resources outlining the this bit of military craftwork and its importance in 20th-century war planning.

Terrain Models, a joint Swiss-American scholarly site dedicated to the European history of military topographic modelling, gives a great overview of how the tradition grew through the ages. With a bit of a slant toward Swiss model-making history, the site does provide a lengthy bibliography, a rundown of model types and a number of photos (sample, right).

In a 2002 article entitled “Allied Military Model Making During World War II” from the journal of Geography and Geographic Information Science, English lecturer Alastair W. Peterson also offers a bit of historical context before detailing the specific importance of models to Allied forces in WWII. Peterson outlines the evolution of methods and materials and also presents a nice chart of common scales and military uses for each (below).

The article also presents personal accounts of the people recruited for model making during the war, and the challenges they too faced far and away from the actual fighting. A recent interview in the Cleveland Plain Dealer provides another set of remembrances from a veteran who spent the war making topographic models, including one used ahead of the Normandy invasion.

Other discoveries I made include a 1945 Universal Newsreel entitled “Secret Maps Guided US Bombers” which offers up a rare behind-the-scenes look at the construction of massive 80 foot 3D map used in planning late war air raids on Japan. And the undated color photo at left shows what purports to be a group of students learning techniques in creating a terrain map for military use during or immediately following WWII.

The articles, sites and photos I’ve uncovered give a cursory overview of military terrain making and their role in WWII. There are some lost gems I’d like to dig into more, including tracking down an actual copy of the 1956 US Army training manual Terrain Models and Relief Map Making (TM 5-249) which is referred to in a number of online bibliographies. But for now, I’ll carry all this history with me as I lay out my next wargaming battlefield in the context of all the historic importance many of the same skills and techniques have played in the wars of the past.