Maybe it was the dampness and spring chill, but Saturday night at Metropolitan Wargamers in Brooklyn was pretty empty with just me and one other club member around. We decided on a two-player boardgame, and being big WWII enthusiasts we picked 2010’s A Bridge Too Far: Operation Market Garden from Battlefront Miniatures.

I’ve been a long-time fan of the 1977 film A Bridge Too Far featuring a classic international cast recounting the events of Operation Market Garden and the botched Allied attempt to chase the Germans out of a number of key defenses in the Netherlands in September 1944. The film does an entertaining job of depicting the colorful real-life personalities against a backdrop of a daring daylight airborne invasion, over-confidence in the weakness of the German forces and disagreement among commanding Allied staff on the plan itself. The game offers two scenario set-ups giving the option of refighting the battle as rather historically depicted in the film or through a plan of your own devising. The game we played was the historical one, and I commanded Field Marshall Marshal Bernard Montgomery’s British and US forces.

The game involves five play turns with a random number of battles making up each turn. Initiative is rolled before each battle, and targeted objective spaces on the board are chosen to attack. Each player chooses to commit some, all or none of their forces to each battle. Different forces – tanks, guns and airborne infantry – each provide bonuses modifiers in different terrain types. Defenders of areas containing bridges get an extra bonus. Resolving combat is a simple roll of the dice with modifiers added. Defeated forces roll to be destroyed or retreat to adjoining areas, and then the next initiative is rolled for. Once a round of battles is completed, strategic moves can be made and the Allied player has the option to air-drop additional forces and supplies into designated areas of the board. The Axis player can then choose to attempt to fend off the Allied air support with their own air power. Keeping supply lines intact is key to the Allied strategy, as forces which are cut-off from their line of supply suffer a greater weakness in subsequent battles. 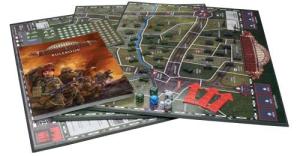 Typical of games by Battlefront Miniatures, makers of the popular WWII 15mm miniatures game Flames of War, this game packs some great design and ease of play into a neat box. While each battle and turn of play involves a number of steps, the game moves along quickly in about 90 minutes. The game comes with over 40 well-sculpted plastic playing pieces, but the version at the club had been modified with painted metal micro-scale armor and troops. Gamers who long-ago graduated from Risk to games like Axis & Allies will find a lot to love in the focused presentation of this game.

Even with the relative simplicity of the game, there’s a lot of strategic play potential. My first time through, my Allied strategy of pushing hard from the rear and left flanks of the board stalled rapidly as my tanks were quickly destroyed by some disastrous die throws against German anti-tank guns. My paratroppers dropped effectively into the middle of the board, yet they too became surrounded and snarled by the superior German armor defending the game’s main objectives. By four turns in, I faced certain defeat with no additional hope for much-needed tank support for my floundering airborne troops.

For a notoriously one-sided battle, I can easily see a lot of replay value in this game . I hope to give this one another shot soon, trying out some less historical and more aggressive strategies in running the Germans off the field. Having a chance to remake history is one of the joys and challenges of wargaming, and the board game A Bridge Too Far: Operation Market Garden provides a lot of opportunities to do so.

One thought on “New Game Weekend: A Bridge Too Far: Operation Market Garden”