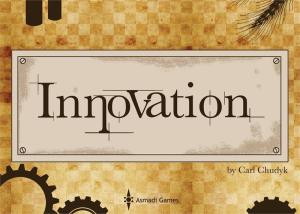 Humans at one of our most basic levels are builders, and gaming offers a wide variety of opportunities to experience the push of civilization building over time. It’s no surprise then that one of the big genres a lot of board, card and even video games fall into is civilization development. The combination of historical facts and the linear nature of societal advancement through the ages lends the subject to a wide variety of games. Gamers return again and again to the chance to play out the evolution of technology, philosophy, warfare, religion, agriculture and art. Sid Meir’s Civilization, Small World, Settlers of Catan, Clash of Cultures and Tzolk’in are just a few of the games I’ve played that fall into this broad category, both historically-based or set in a fantasy realm.

This past weekend at Metropolitan Wargamers, a few of us played through Innovation, the 2010 award-winning card game from Asmadi Games. Retailing at $20, the game consists of 105 unique and text-heavy cards played against a simple set of rules but with a lot complexity in keeping track of your own civilization’s innovation track.

Like most civilization building games, Innovation proceeds along a linear timeline from the Stone Age to the Modern Era. After starting with four cards laid out in front of them, each player chooses two actions in each turn: Draw, Meld, Dogma or Achieve. Cards are drawn from chronological eras numbered 1-10 with cards depicting progressively-advanced innovations. A meld action allows a player to play a like-colored card on top of a card already laid out in front of them. Melded cards supercede the innovation on the cards previously played underneath.

The dogma action is where the meat of the game takes place. Each dogma allows a variety of single or multiple actions that can affect not just the one player but other players displaying equal or greater numbers of symbols such as crowns, factories, lightbulbs, castles, leaves, etc. Dogma actions can result in additional drawn or discarded cards, taking cards from other players or fanning the pile of cards to the right, left, up or down.  As cards are collected and scored, players can take an achieve action to score a level of era achievement for their civilization. Some dogma actions allow a combination of cards to be used to score special achievment cards such as Monument, Empire or Wonder. The first player with five achievements wins the game.

As with most civilization development games, Innovation involves a lot of balance between charting your own progress while keeping an eye on the advancement of other players. Certain dogmas are extremely valuable in moving your civilization forward, but they may also assist the other players, too. This combination of collaborative and competitive play allows Innovation to mirror the arc of human societal development as the ebb and flow of alliances and strength can shift from turn to turn.

Innovation is deceptively easy out of the box, and it’s only through a play through a game or two that the true complexity is felt. Unlike other civilization games which can often  involve managing hundreds of pieces, charts and cards, Innovation’s simple card mechanic is one of its strongest points. The devleopment of human civilization has been a complex road for sure, but with Innovation the road doesn’t get bogged down in a big box of stuff and all the strategy you need is right there in the cards.

Lately I’ve been introduced to a number of board games known collectively as “worker management” games. The main mechanic of these games involves each player’s management of their main game pieces representing workers, family members, tribespeople, etc. With varying combinations of placement and removal of these pieces from the game board, the player gains resources, acquires skills, builds structures or otherwise advances in the varying points systems set up for that particular game. The games usually employ the ability to gain additional workers or lose workers over time. Gaining workers usually involves expending more resources to maintain them but also allows a player the advantage of being able to perform more actions within the game.

Lords of Waterdeep and Tzolk’in are worker managment games within fantasy swords-and-sorcery and ancient Mayan contexts, respectively. To a lesser extent, Small World is also a worker management game, where players manage successive rising and declining races of varying expertise and strength in a quest to control the board. The latest game I’ve tried within this genre is Village which plays out in a Medieval rural village with each player managing four generations of workers through their lifecycle of birth and eventual passing.

Each player begins with their first generation of family members born into the game in their “farmyard” and then deployed to the board. Players can choose to play their pieces in various areas of the board — Crafts, Market, Travel, Church and Council. There are also is also a Harvest area and Family space where new generations fo your family are “born” into the game. Placement in each area can allow a player to gain goods, trade goods for points or otherwise earn points over time. Cubes of four colors as well as pieces representing grain, gold, oxen, horses, plows, wagons and scrolls all serve as tradeable commodities within the game. These are all used in a number of combinations to either acquire different resources or score points.

The key to Village is managing the lifespan of your family members, as placement in each area of the board winds up costing passage of life costs marked in a track of hourglasses. Once a certain amount of lifetime passes, a family member dies off and is placed either in the prominent “village chronicle” book or in a generic grave. Timing exactly when your villagers die determines your shorter term acquistion of more goods or resources and long term point score at the game’s end. Each round of the game involves a re-set of the village and an interesting “mass” at the church where players have the opportunity to move up in prestige (and score points) through their prominence of placement within the church hierarchy.

Like most other worker management games I’ve played, Village is primarily competitive with little to no opportunity for collaboration between players. There’s variety to be had as players can choose to focus on one area of the board over others to rack up points. Players also exercise a certain amount of control of the game’s pace. They can agressively move their generations through their lifecycles and rush the game to quicker finish or they can take their time and focus more on points throughout the game.

While I’ve only played two-player versions of the game thus far, I can’t wait to try a three-or-four-person game where compettion for space and prestige on the board will obviously be more competitive. The game moves fast, and in just about 60-90 minutes players can easily cycle through the rise and fall of four generations in this wonderfully imaginative Village.

This past week’s introduction to a new game came some 3000 miles away from where I typically do my gaming in Brooklyn. I was travelling in Los Angeles for work, and, like any dedicated gamer, I sought out a local gaming group with which to connect. After some online searching, I came across the Westside Gamers who bounce around each Thursday night to a different restaurant or coffee shop in the west LA area. The group typically has about a couple dozen players show up to their weekly boardgaming events, but this week’s gaming night at a Denny’s restaurant in Santa Monica had maybe 30-40 gamers in attendance, many travelling in from out of town for the weekend’s Stragicon convention on West Century Boulevard in Los Angeles. 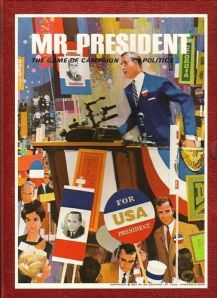 Each week, the Westside Gamers pick a theme game, and this week it was the late-1960s bookshelf game Mr. President, chosen in honor of the upcoming President’s Day weekend. While a few players hunkered down into this four-player game where two teams of two players  each face off in a Presidential election as running mates on competing party tickets, there was plenty of other boardgaming going on around the tables and booths in the restaurant. Members of the group bring loads of games from their personal collections to their meet-ups, so there was an array of new and vintage card and boardgames to choose from in the piles scattered throughout the diner.

I teamed up with three friends — two from Alaska and one from Arizona — for an introduction to Tzolk’in, a wildly-popular Euro-style game based on the Mayan calendar. The game was introduced in 2012 and has become a gamer favorite for its interesting design and play mechanics based around a series of interlocking plastic wheels which mimic the passage of time on the Mayan calendar. The typical collection of wooden and cardboard chips, markers, cards and tiles make for a dizzying array of pieces to manage, but everything ties back neatly to the rotation of the wheels.

Like a few other Euro-style games I’ve played, such as Lords of Waterdeep and Settlers of Catan, Tzolk’in is a worker management game. Each player represents a Mayan tribe with a group of tribespeople workers to manage. In each turn, players either place or pick up one or more of their workers. Placing workers costs corn markers which are used as the primary currency in the game to pay for the health and upkeep of your tribe. Picking up a worker allows you an action such as harvesting corn or wood, gaining resources like stone or gold, building a temple, earning new technologies, paying homage to the gods or earning points through the play of a special crystal skull piece.

But about those wheels. Workers are placed on the wheels, and as each turn progresses, your workers rotate to more beneficial positions and actions. The game involves a lot of planning ahead as you balance resources gained by a worker on one wheel perhaps to be spent constructing a building or advancing a technology on another. Specific strategies seem like easy ways to win, like focusing on placing crystal skulls or earning praise of the gods in the temples. That said, the game isn’t as straight forward as just focusing on a single strategy, as the interplay among players can shift the strategy throughout the game.

Two of the guys I played with had a couple games of Tzolk’in under their belts, and their quick focus on building up stockpiles of resources and their presence in the temples allowed them to easily come out on top as we tallied points at the end of the game. About halfway through the game everything started to click for me, and I realized where I could’ve capitalized a bit more on my early game crystal skull focus rather than diversifying my gameplay. In all, Tzolk’in has quick play of about 90-minutes for four players, and I look forward to hopefully getting in a few games of this back in Brooklyn.