Gaming, at its core, is a matter of pitting at least two sides against each other in a test of tactics and strategy. Whether you’re playing chess or moving hundreds of miniature soldiers around on a tabletop battlefield, you have to pick a side. In most games, there isn’t necessarily a “good” side or a “bad” side. But then you get to Nazis and from there you go to Nazi zombies.

Nazis are the bad guys of the 20th-century, and Nazi zombies take their evil to another level. Maybe its because there’s no way anyone can feel badly about slaughtering a horde of Nazi zombies that makes them so appealing as a foe. There’s also a horrific visual impact of Nazi zombies, as well as some conjecture the Nazis actually had some relation to the supernatural. For whatever reason, Nazi zombies are swarming everywhere and have been creeping up on us for some time.

Nazis And The Occult

Beginning in the 1950s, a spin-off post-WWII historical narrative began to emerge involving the real or supposed fascination that Adolph Hitler and his Third Reich held for the occult. While the Nazi obsession with ceremony and iconography can’t be denied, most of the Nazi-occult conspiracy theories seem to be more about trying to explain how something as evil as Hitler’s Reich could be allowed to rise to power right in front of a watching world. Books, fictional movies and documentaries have delved extensively into this topic of Nazi fascination with weird science and magic. Numerous movies like The Boys From Brazil, Hellboy, Captain America and my favorite, Raiders of the Lost Ark, have all used Nazism and the occult as main plot points. Throwing the dark arts into the mix with the already-hated Nazi bad guys is just one more way pop culture has amped-up the inherent evil of Nazis and their doomed quest for world domination. 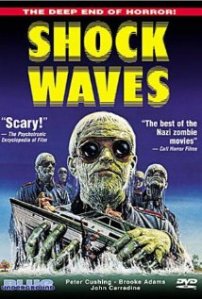 About a decade after the first scholarship on Nazism and the occult emerged, George Romero launched the first wave of modern zombie films with his classic Night Of The Living Dead in 1968. Through a series of sequels and other Romero-influenced movies, the zombie genre slowly grew worldwide during the rise of horror and slasher films in the 1970s and 80s. The Nazi zombie movie subgenre probably arrived in 1977 with Shockwaves starring British horror screen veteran Peter Cushing in the role of a SS commander breeding Nazi zombies who attack a yacht’s shipwrecked crew. The movie began a minor trend almost exclusive to European filmmakers in the 1980s with the B-movies Zombie Lake and Oasis Of the Zombies.

The second life of all things zombie came post-9/11 in a surge of movies, comic books, novels and the critically-acclaimed The Walking Dead TV show. Again, European movies led the way on the Nazi zombie theme with Horrors of War, Outpost and War Of The Dead. My personal favorite in the modern wave of Nazi zombie cinema is 2008’s Dead Snow, a Norwegian film that made the rounds on the art film circuit. The dark uniforms and red, white and black swastika armbands against the mountain snow makes for striking visuals, even more-so as the blood begins to splatter. The film is a tight amalgam of themes from the genre — cursed treasure, local legend and, of course, unsuspecting good-looking vacationers winding up smack in the middle of a battle to the death with Nazi zombies.

Next up on the still-growing list of Nazi zombie movies is this year’s Frankenstein’s Army, which offers a riff on the Nazi zombie theme with a heavy dose of classic horror, science fiction and even steampunk thrown in. Again, the makers of this latest entry in the Nazi zombie genre are European. I don’t think its a coincidence that most Nazi zombie movies have risen out of many of the countries once occupied by the Axis forces. Since many Europeans live most directly with the spaces and stories of WWII all around them, clearly the Nazi zombie storylines of these films are tapping into a vein of horror that still resonates today.

As a kid, one of my earliest video game memories on my Apple II computer was Castle Wolfenstein. While there were no zombies in the game way back in 1981, the modern iterations of the Wolfensetin video game series have included zombies. Not only did the new Wolfenstein games help popularize the now-ubiquitous first person shooter (FPS) game mechanic, but they fired some of the earliest shots in the escalating video game Nazi zombie wars.  Call Of Duty has risen to become one of the most successful franchises in the FPS genre, and a big part of its success can be tied to its Nazi zombie expansions. I would argue that without Nazi zombies as targets, many more wary parents may have kept FPS games out of their children’s hands. Hurling grenades and unloading clips into crowds of Third Reich undead is something to which even the most cautious parents may very well have turned a blind eye.

With the 21st-century rise of all things zombie, tabletop games have also become infected with the undead. Zombicide, Zombies!!! and Last Night On Earth are among the host of gamer favorites pitting the living versus the unliving. Naturally, Nazi zombies have found their way to the tabletop, too. Two popular games — Dust Tactics and Incursion — take an alternative history approach to incorporating zombies into Axis powers. Among all the futuristic technology available in the miniatures game Dust Tactics are squads of zombie soldiers which prove to be fast and incredibly deadly in the game. Similarly, the game Incursion include zombies in the living arsenal created by evil Nazi scientists.

Beyond packaged boardgames, wargaming has followed the zombie trend. The “weird World War II” genre of miniature and RPG games offers some monstrously fun modelling and play possibilities with such things as bizarre zombie battlescapes, fantasy technology, magic-using stormtroopers and lycanthropic soldiers in a WWII alternate universe. Weird War II: Blood On The Rhine from 2001 was one of the early RPG systems incorporating zombies and occult alternatives to the WWII time period. Nazi zombie miniatures in both 15mm and 28mm scales are now mainstays in online gaming forums and at regional conventions. Rules systems have been written to accommodate the Nazi zombie craze and players regularly create house rules for other regular WWII-themed games such as Flames of War and Bolt Action.

Nazi zombies have their own history now, rising out of theories of Nazi-occultism and then mined as the nightmare bedtime story for European horror filmmakers for nearly four decades. As the ultimate in evil, Nazi zombies now lurk in every corner of popular culture, much of it overlapping with the gaming hobby onscreen and on the table. Debates will continue to rage between the historical gaming purists and those who love their Nazi zombies. Honestly, playing with Nazi zombies has become just too fun to ignore and the horde just keeps coming.