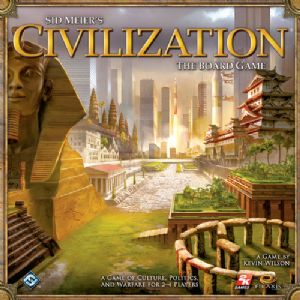 Unlike myself, electronic games have been a constant presence with both my sons since they were born. Now aged 8 and 13, my boys have graduated up through a host of platforms and games with the Leapster, DS, PS2, Wii, PS3, online through sites like Steam and on the iPhone. Over the past year, their obsessive play over Minecraft has been gradually replaced with scores of hours logged with the wildy-popular Civilization V.

Developed more than 20 years ago by Sid Meier and Bruce Shelley, the Civilization franchise has evolved from a PC-only DOS game to occupy a variety of gaming platforms. The turn-based civilization-building mechanic and historical theme sets up an incredibly-engaging and educational universe for players to plan and play out a nearly-endless variety of paths in human advancement from the ancient era to the near future. The latest iteration, Civilization V, broke on the scene in 2010 with two expansions since. Worldwide, the game has sold millions of copies and has continuously won accolades from a couple generations gaming critics and devoted fans alike.

Even though my kids are devoted electronic gamers, they’ve also been raised with a healthy love for card, board and miniatures gaming. So, when my 8-year-old caught wind last week that a boardgame version of Civilization existed, I leapt at the chance to introduce the boys to the game. I’ve played a number of civilization-building games such as Clash of Cultures but hadn’t yet played Civilization.

Now published by Fantasy Flight Games, Sid Meier’s Civilization: The Board Game has been around since 2002 and can be found at your local Barnes and Noble for $60 or cheaper online. Like many games of this type, the box comes stuffed with hundreds of components plus more than 300 cards. Geared for 2-4 players ages 14 and up, Civilization takes 3+ hours to play. Fortunately, my boys have been exposed to enough games, both online and on the tabletop, that they’ve been able to quickly pick up on the basic play and strategy Civilization offers.

Civilization involves a march toward victory in one of four ways: Economic, Military, Cultural or Technological. Players begin by selecting a civilization such as the Americans, Egyptians, Romans or Russians. Each starting civilization carries its own strengths in play, making this first choice an important one in setting your strategy for the game. Based on the number of players, a map of hidden tiles is laid out and the market area is set up to the side of the board.

After set-up, the game progresses through a series of turns. In the Start Turn, a player may build a city or change their government type – an important choice which can greatly affect the path of a player’s civilization. Next, the Trade Phase allows a player to reap trade points from the areas around their cities and offer trades in resources with other players.

In the City Management Phase, the player may build units or buildings, harvest resources or focus on developing their culture. Building units – Scouts or Armies – allows the player to explore and conquer areas of the board. Constructing buildings such as Markets, Temples or Baracks allows a variety of bonuses to your civilization. At a higher price, Wonders like The Oracle, The Hanging Gardens or Angkor Wat may be built. Finally, a player may pay to build their military prowess through a progression from simple archers and pikemen to tanks and aircraft. Aside from building, a player may harvest resources such as silk, iron, incense or wheat to be later spent to activate certain technologies already researched. A player may also choose to focus on culture, with gained cultural points moving the player up the culture track while also earning special cultural event cards played to change different courses of the game’s play.

Next, in the Movement Phase a players may move their Scouts and/or Armies to explore, claim new territory or engage in combat with a barbarian village or another player. In the final Research Phase, players may spend their earned trade points to develop new technologies. The game’s “technology pyramid” is built progressively by each player as they grow from simple technologies such as Metalurgy and Horseback Riding toward higher level advancements all the way up to Flight and Nuclear Energy.

The play adavances through the above turns until a player arrives at a victory condition. Cultural victory is earned by completing progress on the culture track. A military victory is won by conquering an opponent’s capital city. Earning a technological win is done by completing the technology pyramid all the way up to Space Flight. Finally, an economic outcome is reached by collecting 15 gold coins earned through various actions your civilization makes throughout the game.

To summarize the game in a couple paragraphs is hard, as the variation of play in the game is boundless. This weekend, my younger son and I played through our first quick starter game on an eight-tile two player-map (pic below). Despite over twenty pages or rules and scores of playing pieces to manage, he picked up the game really fast. Along the way, there’s a ton of reading I’m certain is not covered in the general elementary curriculum with stops along the way to have side conversations on the meanings of words such as “despotism” and “anarchy.” At his age, my son’s memory is quite amazing and our discussions of the finer points of the rules has continued even away from the game table.

In our second game (pic below), three of us played on a larger map. My older son, a pretty experienced gamer at this point, blew threw a ten minute intro to the rules and played as the Prussians with an aggressively militaristic strategy I’ve grown used to over the years. Using the Egyptians, my younger son focused on culture and building construction. For my own strategy, I played as the Romans with a healthy mix of the military and cultural expansionism for which their empire was known.

For parents and critics of them who decry the falling attention spans of today’s kids, weekends like this past one show how with a bit of parental creativity all the stereotypes simply fall away. A game like Civilization — both online and off — offers so many opportunities to build vocabulary, learn history and develop some complex multi-layered management skills I see sorely lacking in many of the adults I encounter. Over hours of focused play, not only are my sons and I developing our civilizations but we’re also developing each other — an investment in time together well-spent.