A week from now, Americans will be sitting down at Thanksgiving and joining with friends and family around tables in shared gratitude. Actually, Thanksgiving put this way sounds like what I do every week with dice, cards and game pieces instead of turkey and side dishes.

The time after Thanksgiving dinner was traditionally a time for games at my grandparents house when I was a kid. After the dishes were cleared, some of my uncles would sack out on the couch in front of a football game on TV but I always lingered at the table where the real games were happening. My grandmother, great aunts, aunts and mom would hold court at one end of the room-length table with a few rounds of Bridge and family gossip. At the far end, some other aunts and uncles hauled out a well worn Scrabble board and played a steady game of vocabulary one-upmanship. Some of my cousins would spread around on the hallway floor for games of War, Parcheesi and Hi Ho! Cherry-O. As the eldest of my many cousins, I always sat at the big table for dinner and there I mostly remained watching the adults play their games.

This year I’m particularly grateful to be hosting my brother and his family for our holiday shared meal. My brother is my oldest gaming partner dating back to the 70s and 80s when we first discovered oddly-shaped dice and little metal miniatures to paint. We are both fortunate to have wonderfully understanding wives who who have partnered with us in raising a second generation of tabletop gamers, and all of us will be present in Brooklyn for Thanksgiving this year. 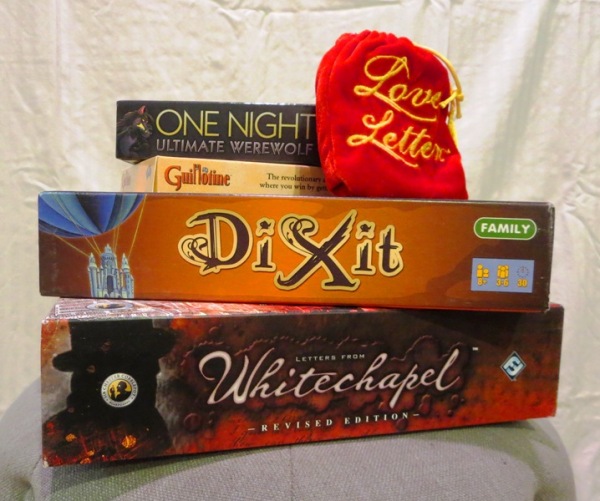 Our tastes in games range wider than the traditional board and card games favored by the older generations in my family. Even so, getting four adults and five kids (boys and girls ranging in ages 10 to 16) all engaged in the same game today remains a challenge. Our interests and commitments vary, but here are few which have worked for our family’s diverse audience over holidays past.

The Friday after Thanksgiving is a day off for many, and hoards of Americans are up early, out the door and racking-up credit card debt with overly-publicized Black Friday shopping. Since I do everything I can to avoid the masses over the holiday weekend, the Friday after our family feast presents a rare full day to be filled with gaming. This year it’s also my visiting brother’s birthday, and celebrating the day is a great opportunity to pull a few a few of the larger board games off my shelf. I usually max out at about 2-3 players in these games, so having up to five players around the table will be a treat.

Every family has their holiday traditions, and each generation builds on these and creates their own new traditions. Games remain a constant thread for my extended family through the holiday run from Thanksgiving through Christmas. The themes, mechanics and mechanics may have changed over the years, but at the root of our gaming is the chance to spend a few hours playing with those closest to us. This Thanksgiving, step away from the screens, clear the table and find your own gaming tradition with your family and friends. 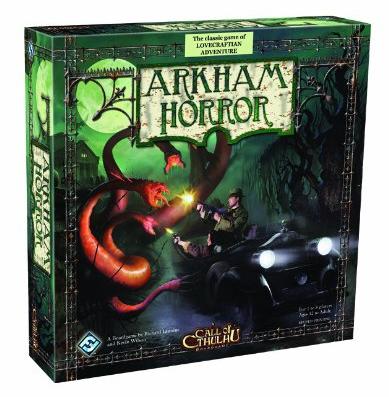 Released in 1987 and then vastly revised in 2005 and 2007 by Fantasy Flight Games, Arkham Horror is one of the modern classics in horror-fantasy boardgames. This past weekend, the creatures of Arkham Horror invaded our home in Brooklyn, and my sons and I have a new favorite.

Based on the writings of H.P. Lovecraft and his Cthulhu Mythos, the game casts 2-8 players in the roles of investigators in the fictional town of Arkham, Massachusetts during the interwar period of the 1920s. The New England town has been beset by the terror of strange rumblings of monsters invading the streets accompanied by weird magic, supernatural beings and strange goings-on. The mission of the investigators is to travel through portals to Other Worlds and seal them before a great Ancient One emerges in the town. Along the way, investigators accumulate clues, arcane items, spells and skills by visiting various locations in the town. If the portals are not closed in time, the horrific Ancient One rises and squares off in a final epic battle with the investigators in a last-ditch effort to save Arkham and the world as we know it. 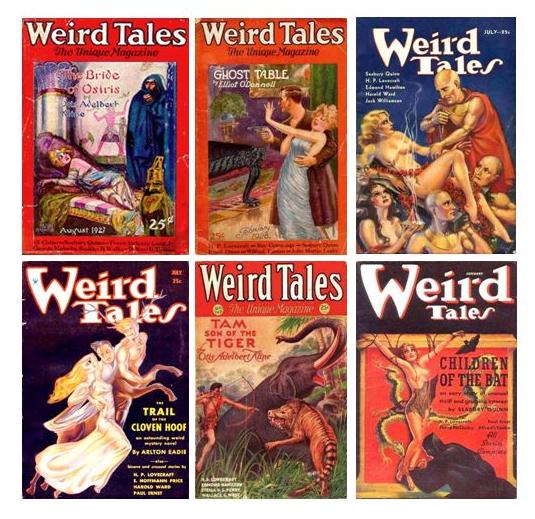 Issues of Weird Tales magazine featuring the work of H.P. Lovecraft from 1927 to 1937

H.P. Lovecraft is a darling of gamers and science-fiction/horror fans, and his influence resonates throughout today’s pop culture of movies, comic books, fantasy literature and gaming. Throughout the 1920s and 1930s, Lovecraft published a series of short stories broadly placed in the weird fiction category combining elements of horror, science fiction, fantasy and crime genres. With its troubling themes of peril and unknown, weird fiction was perfectly suited for a broad mindset of American society just emerging from World War I, living through the Great Depression and watching the storm clouds of World War II gather on the horizon.

Weird fiction found a home with the cheap pulp-paper magazines popular in the first half of the 20th-century including dozens of titles such as Argosy Magazine, Amazing Stories, Western Story Magazine and Weird Tales. Within their wondrous and often racy covers, pulp magazines featured everything from western adventures, jungle stories, Victorian detective tales, sword and sorcery plots and science-fiction wonders. Authors such as Arthur Conan Doyle, Robert E. Howard, Edgar Rice Burroughs and Lovecraft could all be found side-by-side within these magazines. The stories from pulp magazines were of profound influence on countless later 20th-century writers and directors, perhaps most famously with Steven Spielberg and George Lucas. As kids in the 1970s and 80s, reprints of many of these pulp tales filled the heads of my circle of friends and informed our lifelong interests in all things weird and fantastic.

One of Lovecraft’s most enduring stories, The Call of Cthulhu, was first published in Weird Tales in February 1928. The story recounts a mystery of an ancient cult of a mythic tentacled beast known as Cthulhu and the worldwide quest to uncover its origins and its new rise to plague the modern world. Through subsequent stories by Lovecraft and other writers, the world of the Cthulhu stories grew to be dizzyingly expansive in it depth of detail and plot. Today, Lovecraft’s Cthulhu universe serves as an insidery geek shorthand that stretches from stories, games, comic books and compendium reference books to clothing, statuettes, cupcakes, tattoos, jewelry and countless other collectibles.

Arkham Horror from Fantasy Flight Games gets unboxed at our house

My older son recently scored a free copy of Arkham Horror after serving as a counselor in training during the summer day camp program at Brooklyn Game Lab, and we jumped into a full weekend of playing this wonderful game. People familiar with products from Fantasy Flight Games will find a box of incredibly well-designed pieces, with a richly-illustrated game board and hundreds of cards, playing pieces and reference sheets. The rules are daunting and require several plays to wrap one’s head around, but eventually Arkham Horror moves along briskly in a couple hours of gaming.

The game is basically a race against time until the Ancient One awakens to destroy the town. Much like an adventuring party in role-playing games like Dungeons & Dragons, players choose to play as one or two of sixteen roles such as a researcher, magician, gangster, nun, archaeologist or drifter. Each character begins with set standard and specialized equipment, money, spells, skills and allies laid out on a card depicting base abilities. The abilities — speed, sneak, luck, lore, will and fight — are each measured on a track that allows a player to boost or lesson their effectiveness at the beginning of each turn. Players move to various locations within Arkham where they find clues, engage in encounters or perform other actions like healing at the hospital, hiring allies at the boarding house or shopping for items at the general store or curiosity shop. Armed with items, skills and spells, characters either engage in combat with revealed monsters or attempt to slip by them. Taking damage from monsters or other encounters reduces an investigator’s Stamina (ie, health or hit points) or Sanity, driving the player closer and closer to death or madness.

At the end of each player round, a Mythos card is revealed opening a new portal to the Other Worlds, spawning new monsters and moving monsters already in the town. A character moving to a portal spends two turns journeying in one of eight Other Worlds where they may encounter more monsters or find objects. Upon emerging from the Other World, a character attempts to close or even seal the portal at the location. Each turn, the Ancient One moves on step closer to awakening. Players must either close or seal a set number of portals before the Ancient One arises for a final battle with all the players. 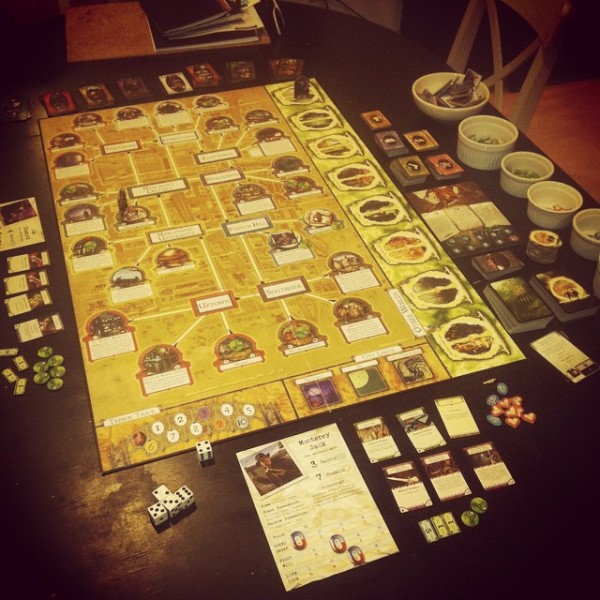 Arkham Horror laid out for our first games this past weekend

Like Lovecraft’s written work, there is an enormous amount of story in Arkham Horror. The game plays like a rich role-playing game with backstories on the investigator characters and detailed information on the various cards and monster pieces. Since the game is collaborative, everyone either wins or loses, making collective planning and playing to each character’s evolving set of equipment and abilities a must. For instance, certain characters may be more adept at moving quickly and acquiring valuable items while other characters may be better suited to go to battle with physical or magical beasts. In a battle with the Ancient One, the collective strengths of the entire group will combine to have any hope against defeating the creature and saving Arkham.

My sons — ages 14 and 9 — played three games of Arkham Horror with me this past weekend, and it’s a big hit at our house. We’re all fairly experienced gamers and we’ve logged many hours with some pretty heavy boardgames like Civilization, also from Fantasy Flight Games. Arkham Horror is suggested for ages 12 and up, and the flavor text on the game cards and mechanics were a bit on the challenging side for my younger son. With that said, with a little help on the heftier vocabulary words, he enjoyed the story, collecting items and using various combinations of gear, spells and skills to destroy some monsters and seal portals to the Other World. By the end of the weekend, my older son and I also started getting a handle on using characters in combination to effectively work through the rising tide of beasts and terror in the town. No matter the age, Arkham Horror is going to push any gamer’s skill and sanity to the limit.